Enjoy our team's carefully selected Watermelon Jokes. Laugh yourself and share the funniest jokes with your friends! 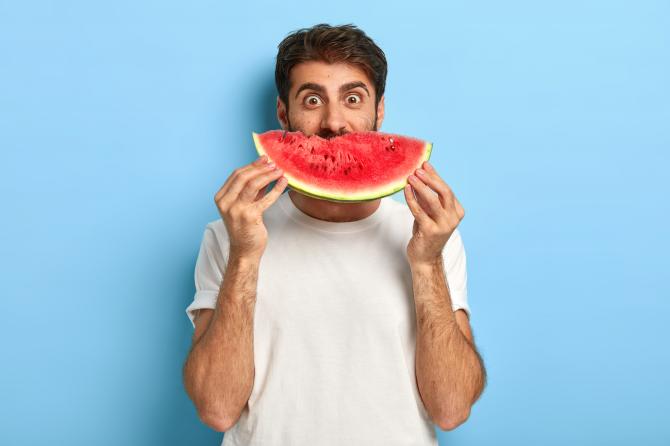 Why did the watermelon go crazy?

He lost his rind.

When do you start on red and stop on green?

When you are eating a watermelon.

What do you have left over after a pig eats a watermelon?

What do you get when you cross a watermelon with broccoli?

What did the watermelon write on his Valentine’s card?

Did you hear about the watermelon who starred in a telanovella?

Math, the only world where you can buy 140 watermelons without your motives being questioned.

If watermelon has water in it...

Then what does a kumquat have?

A guy goes to see a doctor.

Guy: “Doc, I have a kingdom of ants inside my butt, and these be killing me, what can we do?”

Doc: “Get a watermelon, sit on it, once the ant king gets a taste, he’ll call his friends to join him out.”

And sure enough our guy does as instructed, after hours of watermelon sitting, the ant king comes out for a little taste.

I started working at a Watermelon street market booth. My first customer was I guy really big. Seriously built, kind of like The Rock but taller.

He asks, “How much for the watermelon?”

Me: “Sir, we only sell entire watermelons. For 8 bucks.”

Guy: “I am telling you that I want half.”

The guy was getting angry.

Me: “Sir, let me repeat. We only sell entire watermelons for 8 each.”

Guy: “Well, then go ask your manager because I want to buy HALF OF A WATERMELON!”

Now the guy was pretty pissed.

So, I went to the back of the tent and was explaining to my boss, “This ridiculous, stupid man wants to buy only half a watermelon for 4 dollars!”

And then I looked, and the giant was standing right behind me with a very bad face. Eyes blood-red in anger.

So I said very graciously, “And, this fine gentleman here would like to purchase the other half.”

I have the head of a watermelon, the arms of two French baguettes, the chest of two pillows. What am I?

Banned from the supermarket.

Why did the watermelon have brown spots all over its skin?

A farmer has transported his watermelons to a roadside stand to sell.

At the end of the day there are a couple hundred left, and he isn’t looking forward to the tedious process of loading them back on the truck, taking them back to the farm, then reversing the process the next morning.

He comes up with a labor-saving solution: Next to the bin where his melons are carefully arranged, he places a large sign saying “ONE OF THESE IS POISONED”.

Reassured, he goes home to sleep.

In the morning, he comes back to find that someone has written on his sign “Now there are two”.

What do you call a dog that herds watermelons?