Enjoy our team's carefully selected Chuck Norris Jokes. Laugh yourself and share the funniest jokes with your friends! 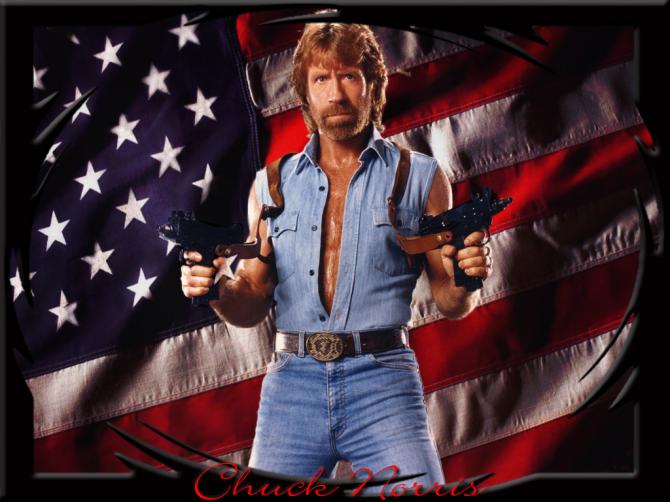 He stares at the ball and the ball goes into the hole to hide.

Chuck Norris once soaked his beard in carbonated water.

The result is now sold as Red Bull.

And the sun got so scared it hid behind the moon.

Chuck Norris invented the Giraffe when he roundhouse kicked a spotted Horse in the chin.

A man taunted Chuck Norris by holding a bag of potato chips in front of him and saying, “Betcha can’t just one!”

Chuck Norris subsequently ate the chips, the bag, and the man whole.

Chuck Norris’ first job was as a paperboy.

There were no survivors.

Many years ago Chuck Norris and a brown bear had a fight.

The loser had to go live in the North Pole.

Usually, when kids go to sleep they sleep with a teddy bear.

Chuck Norris carried his the same distance in half the time.

In high school, teachers had to raise their hand to speak to Chuck Norris.

What do you call a man who keeps vomiting?

Chuck Norris can squeeze orange juice out of a lemon.

Chuck Norris once ate a Rubik’s Cube and pooped it out solved.

When Chuck Norris turned 18, his parents moved out.

There is no chin behind Chuck Norris’ beard. There is only another fist.

When Chuck Norris was a baby, he farted for the first time, that is when the big bang first happened.

When Chuck Norris’s parents had nightmares, they would come to his bedroom.

When the Tooth fairy comes to your house, she takes your tooth and gives you money.

When Chuck Norris comes to your house, he breaks your tooth and takes your money.

Chuck Norris recently had the idea to sell his pee as a canned beverage.

He stares them down until he gets the information he wants.