Enjoy our team's carefully selected Halloween Jokes. Laugh yourself and share the funniest jokes with your friends! 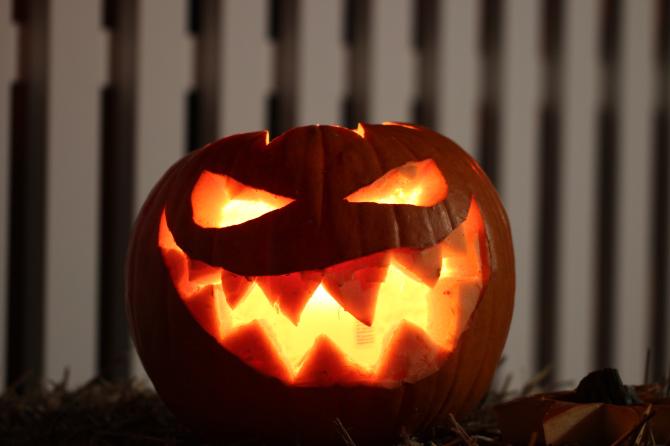 Two monsters went to a party.

Suddenly one said to the other, “A lady just rolled her eyes at me. What should I do?”

“Be a gentleman and roll them back to her.”

Patient: “Doctor, I think that I’ve been bitten by a vampire.”

Doctor: “Drink this glass of water.”

Patient: “Will it make me better?”

Doctor: “No, but I’ll be able to see if your neck leaks.”

Dracula wanted to know which of his bats was the best. So he organized a little competition. The bat which would drink more blood in less time than others would be the winner.

The first bat went and came back after 10 minutes. Its mouth was full of blood. Dracula was impressed.

The bat said, “Do you see that tower? Behind it there is a house. I went inside and drank the blood of all the family.”

The second bat went and came back after 5 minutes. He too had blood on all his face.

Dracula was shocked, “How did you do that?”

The bat said, “Do you see that tower? Behind it there is a hotel. I went inside and drank the blood of all the guests.”

Now the third bat went and came back just after 1 minute. There was blood on all his body.

Dracula couldn’t believe his eyes, “How did you do that?”

The bat said, “Do you see that tower?”

Why didn’t the skeleton go see the scary movie?

He didn’t have the guts.

I got so sick of trick-or-treaters on Halloween night that I finally turned off all the lights and pretended I wasn’t home.

Forget the ships! My lighthouse, my rules!

My wife and I are going to be Carl and Ellie from Disney’s Up for Halloween.

Do zombies eat popcorn with their fingers?

No, they eat the fingers separately.

Why are there gates around cemeteries?

Because people are dying to get in.

One Halloween a trick-or-treater came to my door dressed as “Rocky” in boxing gloves and satin shorts. Soon after I gave him some goodies, he returned for more.

“Aren’t you the same “Rocky” who left my doorstep a few minutes ago?” I asked.

“Yes,” he replied, “but now I’m the sequel. I’ll be back three more times tonight too.”

A woman whose husband often came home drunk decided to cure him of the habit.

One Halloween night, she put on a devil suit and hid behind a tree to intercept him on the way home.

When her husband came by, she jumped out and stood before him with her red horns, long tail, and pitchfork.

“I’m the Devil!” she responded.

Doctor: “Who’s my next patient?”

What did the vampire say to his hungry friend?

I visited a real graveyard yesterday...

What should you give a pumpkin who can’t quit smoking?

What is a vampire’s worst fear?

Wanna know why skeletons are so calm?

Because nothing gets under their skin.

What do dentists hand out at Halloween?

I met a ghost at the supermarket, guess what she was buying?

Yo mama so ugly, the government decided to move Halloween to her birthday.

When it’s neck and neck.

I’m not saying my wife is ugly... but on Halloween she went to tell the neighbors to turn their TV down and they gave her some candy.

Why hasn’t anyone ever seen ghost poop?

Why is the woman afraid of the vampire?

Because he is all bite and no bark.

What happened to the cannibal who showed up late to Halloween dinner?

They gave him the cold shoulder.

Why do Jack-o-lanterns have wicked smiles?

Because they just had their brains scooped out!

Why didn’t the zombie go to school?

He’s a pain in the neck.

What does for call the moon after a bat flies into it?

Do you want to invest in my startup company to destroy all vampires?

The skeleton didn’t mind that everyone called him a bonehead.

I won my 17th straight Halloween costume contest as a hot dog.

I let my kids pick my Halloween costume this year.

They chose a hot dog... this is going to be my wurst Halloween ever.

This Halloween, Gucci sold out all of their $500 scented candles.

Some people seem to have so many dollars but not enough scents.

It dampens their spirits!

What do you do when 50 zombies surround your house?

How do you tell a good monster from a bad one?

If it’s a good one you will be able to talk about it later!

What do you call a desert-dwelling witch?

What do ghosts use to do their makeup?

What did people say when the headless horseman started dating a zombie?

Why was the jack-o’-lantern afraid to cross the road?

He had no guts.

Why are spirits so lonely?

They have no body to love.

Why do cemeteries contain the best stories?

Because they have so many plots.

How do you get inside a locked cemetery at night?

Simple, use a skeleton key to unlock the gates.

What did the skeleton bring to the potluck?

How do you make a skeleton laugh?

What’s the problem with twin witches?

You never know which witch is which.

When do ghouls and goblins cook their victims?

Why can’t two ghosts make out?

They go right through each other.

What do you call six witches in a Jacuzzi?

What’s the name of the Democratic skeleton from Brooklyn, New York who’s running for president?

What happened to the man who got behind on payments to his exorcist?

What happens if you combine a vampire and a snowman?

What is the witch’s favorite crime show?

Where does a ghost go on vacation?

Why do ghosts make the best cheerleaders?

Because they have spirit.

What did one ghost say to the other?

What do you call a skeleton who lays around all day?

Why did the skeleton run away?

Because a dog was after his bones.

What did one ghost say to the other ghost?

Do you believe in people?

How do pumpkins get up to the roof?

Why did the hot dog dress up?

It felt a little halloweenie.

What do you call a hot dog with nothing inside it?

Why don’t mummies ever take a summer vacation?

What do you call a witch’s garage?

Why are ghosts terrible liars?

You can see right through them!

Why don’t mummies have friends?

Because they’re too wrapped up in themselves.

What do Italian ghosts have for dinner?

What do moms dress up as on Halloween?

What does a panda ghost eat?

What is in a ghost’s nose?

Why did the werewolf go to the dressing room when he saw the full moon?

He needed to change.

Why don’t werewolves ever know the time?

How do you repair a broken jack o’ lantern?

Use a pumpkin patch.

What is a monster’s favorite part of a birthday celebration?

He didn’t have the stomach for it!

Two men were walking home after a Halloween party and decided to take a shortcut through the cemetery just for laughs.

Right in the middle of the cemetery, they were startled by a tap-tap-tapping noise coming from the misty shadows.

Trembling with fear, they found an old man with a hammer and chisel, chipping away at one of the headstones.

“Holy cow, Mister,” one of them said after catching his breath, “You scared us half to death — we thought you were a ghost! What are you doing working here so late at night?”

“Those fools!” the old man grumbled. “They misspelled my name!”