Enjoy our team's carefully selected Movie Jokes. Laugh yourself and share the funniest jokes with your friends! 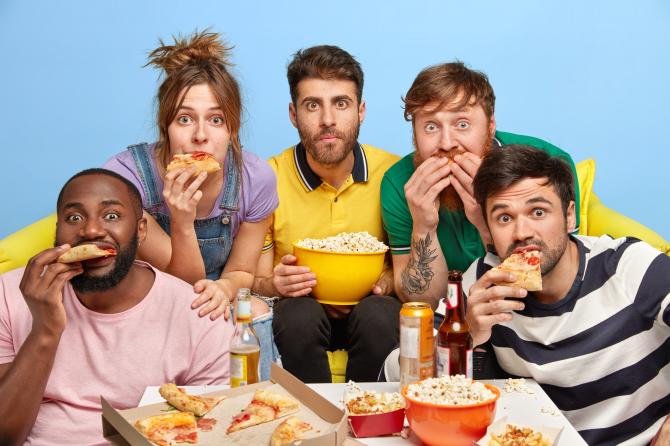 Several aristocrats are having a party on a cruise ship, when the captain comes down and interrupts.

“I have some good news and some bad news,” he says. “Which do you want to hear first?”

“Good!” everyone says in unison.

Watch a horror movie in the dark.

Why is everyone obsessed with that new horror movie?

Like, I was driving today and this is the third time someone has rolled down their window and yelled to me “Hey! Watch It!”.

A Man was watching TV one day, when all of a sudden he began screaming in terror.

“Mom, is Dad watching a horror movie?” his son asked.

“No, dear, he’s watching our wedding video,” the mom replied.

The first one finds a roll of film and eats it.

When he’s done, the second one asks, “How did you like the movie?”

The first one responds, “It was OK, but I liked the book better.”

Why didn’t the butter take the part in the new movie?

Because it didn’t like the roll it was being offered.

Why didn’t the skeleton go see the scary movie?

He didn’t have the guts.

Did you see the movie about the hot dog?

It was an Oscar Wiener.

What is Spider-Man’s favorite Disney movie?

The Superman 2 movie and a documentary about the Moon Landing had accidentally been scheduled at the same time for the Lunar Background part of the movie lot.

They argued about who should get to use it first, but then they remembered...

Because all they do is colonize.

Yo momma’s so hairy, when she went to the movie theater to see Star Wars, everybody screamed and said, “IT’S CHEWBACCA!”

People often ask me how I manage to smuggle chocolate into movie theaters.

Yo Mama's appetite is so huge, she uses a truck to carry her popcorn to the movies.