Enjoy our team's carefully selected Tomato Jokes. Laugh yourself and share the funniest jokes with your friends! 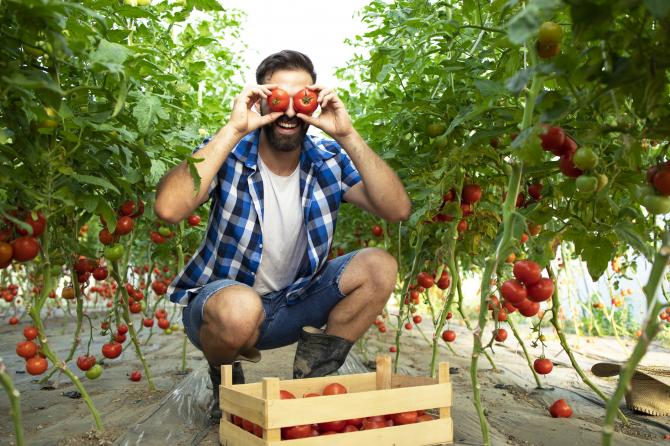 There is nothing like a little tomato soup to soothe the soul.

Even if it’s cold. Over ice. With a celery stalk. And vodka.

A man orders a tomato soup at a restaurant.

As soon as waiter brings the soup.

The Man started yelling at waiter and ask him to taste the soup.

Waiter: “Sorry sir, we’re not allowed to do that. I will bring you another one.”

The Man yelled at the waiter again and asked him to taste the soup.

The waiter was nervous by now, so he told the man, “I will call the manager.”

As soon as manager arrives, the Man starts yelling at him and asked him to taste the soup.

The manager apologies and tells the same thing that it is not in their policy, and he asks waiter to bring another one.

But the man wouldn’t stop asking the manager to taste the soup.

Finally, manager gives up and said, “OK. I will taste the soup. Please give me the spoon.”

What type of tomato smells best?

Judge: “Lady, you shoplifted a can of tomatoes, so I sentence you to four weeks in prison, one for each tomato.”

Lady’s husband: “Your honor, don’t forget, she also stole a can of peas.”

An elderly man living alone in Manchester wanted to plant his annual tomato garden, but it was very difficult work, since the ground was hard.

His only son, Paul, who used to help him, was in prison.

The old man wrote a letter to his son and described his predicament:

I am feeling pretty sad, because it looks like I won’t be able to plant my tomato garden this year. I’m just getting too old to be digging up a garden plot. I know if you were here, my troubles would be over. I know you would be happy to dig the plot for me, like in the old days.

A few days later, he received a letter from his son.

don’t dig up that garden. That’s where the bodies are buried.

At 4 a.m. the next morning, CID officers and local police arrived and dug up the entire area without finding any bodies. They apologized to the old man and left. That same day, the old man received another letter from his son.

go ahead and plant the tomatoes now. That’s the best I could do under the circumstances.

Did you hear about the ketchup thief? He was caught red-handed.

I don’t put ketchup and mustard on my hot dog, I relish it.

Why do the hot dogs with ketchup spoil early?

Because the sauce ages.

There is currently a tomato ketchup shortage in America.

If they run out of mayonnaise too, does that make it a double-dip recession?

My wife asked me to put ketchup on the shopping list.

Now I can’t read anything.

Dropped a huge bottle of ketchup on my foot.

What did the salad dressing say to the tomato?

How did the hot dog ask the ketchup out?

He mustard up the courage.

I was eating a hot dog the other day and when I took a bite, ketchup squirted in my eye...

Why does ketchup on hot dogs spoil early?

Why was the man holding a bottle of ketchup?

Because it was raining cats and hot dogs.

What did the Mama Hot Dog say to the little frankfurter?

What did Alex say to his college roommate to get him to stop working on his college essay and come out for hot dogs?

Why does a Chicago-style hot dog always lose races?

Because it refuses to ketchup.