Enjoy our team's carefully selected Time Jokes. Laugh yourself and share the funniest jokes with your friends! 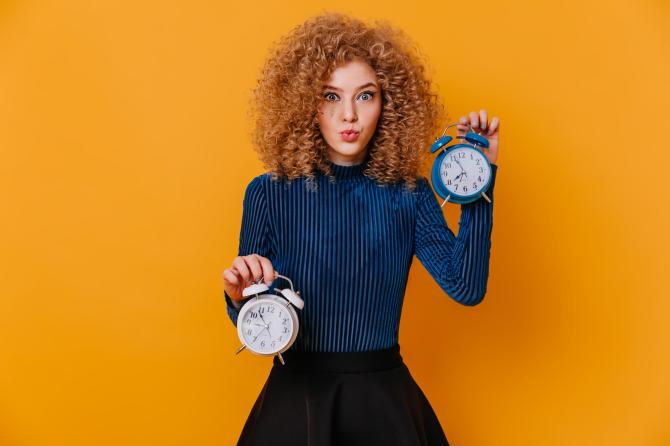 How do chickens wake up on time?

Three gulag inmates are telling each other what they’re in for.

The first one says, “I was five minutes late for work, and they charged me with sabotage.”

The second says, “For me, it was just the opposite: I was five minutes early for work, and they charged me with espionage.”

The third one says, “I got to work right on time, and they charged me with harming the Soviet economy by acquiring a watch in a capitalist country.”

When showing up on time is an actual miracle?

When everyone expects you to be late, and you roll up on time.

Why did the girl sit on the clock?

She just wanted to be on time.

What treat is never on time?

What did the first egg tell the second egg when it didn’t make it on time?

One company owner asks another, “Tell me, Bill, how come your employees are always on time in the mornings?”

Why do retirees smile all the time?

Because they can’t hear a word you’re saying!

Why don’t werewolves ever know the time?

Remind your kids not to overdo it on the pumpkin pie this time of year.

Wives are strange creatures. Mine sometimes waits up for me till I come home at 3 am to ask me whether I know what time it is.

The last twenty-five years have been a bizarre time to grow up.

Why was Aunt May worried about Peter Parker?

He was spending too much time on the world wide web.

Yo momma so stupid, she thought parsec was a unit of time.

The moon gets a little more chilly in September, time to put on its harvest!

How does an astronaut tell the time?

They just check their rocket watch.

Yo mama so old, not even the time stone could make her young.

The thing people overlook most of the time is their noses.

What’s the difference between stormtroopers having a party and mushrooms being picked?

One’s bad guys having a fun time and the other one’s fungi having a bad time!

It would have been a photo finish, but by the time my horse finished, it was too dark to take a picture.

How do you know it’s time to retire?

It’s when you stop lying about your age and start bragging about it!

The worst part about being a giraffe...

Is having a lot of time to think about your mistakes when you’re sinking into quicksand.

Your mama so stupid, she put a watch in the piggy bank and said she was saving time.

Have you ever tried to eat a clock? It’s very time-consuming.

The easiest time to add insult to injury is when you’re signing someone’s cast.