Enjoy our team's carefully selected Summer Jokes. Laugh yourself and share the funniest jokes with your friends! 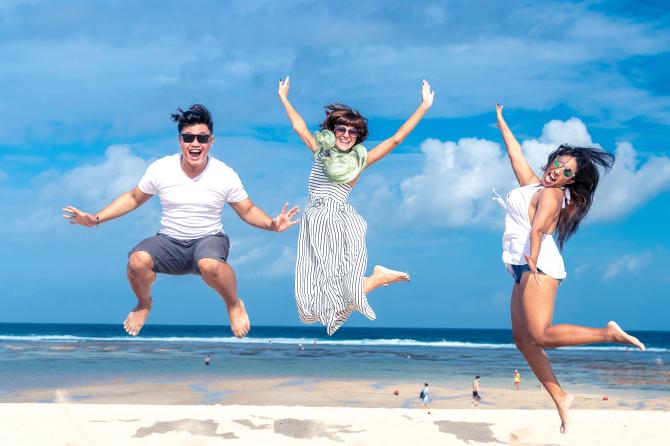 Many years ago in an Indian city-state there lived a very poor fisherman.

One day, he has an especially good haul and earned a glistening gold coin.

Elated but afraid to lose it, he decided he’d hide his treasure in the kingdom’s Northern wall between a crack in the bricks. He then returned home.

Months later, he finds that his pockets have run dry and desperately needs money for food.

Suddenly, he remembers the gold coin he hid and takes off towards the kingdom’s Northern wall in the blazing summer heat.

On his long run towards his hiding place, he passes the royal palace, where the king is relaxing idly on the balcony.

The king spots him and tells his guards, “This man should not be running in such heat. Fetch him for me, I want to learn of his purpose.”

The fisherman is brought before the king and explains what he is doing.

“No one should have to run in such heat. Here, take a gold coin and return home,” states the king.

The fisherman replies, “Thank you, but I would like to get the coin in the wall that I have earned, it means a lot to me.”

The king then offers two coins but gets the same response.

Perplexed at this man’s determination, he steadily raises his offer but to no avail.

Eventually, the king gets frustrated and cries out, “I will give you half my kingdom if you give up on this coin!”

The fisherman thinks for a minute and finally agrees.

At the fisherman’s coronation ceremony days later, the king finally says, “It is time for you to receive half of this kingdom. What half of the kingdom do you desire?”

The fisherman replies, “The northern half.”

It is so hot by the time I got home from buying eggs, I had twelve chicks in the bag.

It’s so hot that my kite crashed and burned.

It’s so hot that you can tell who has plastic surgery.

It’s so hot that the soles of my shoes melted.

It’s so hot that you can poach eggs in a pool.

It’s so hot that the clams were already steamed when I dug them up.

It’s so hot that firecrackers light themselves.

It’s so hot that my clothes dried right after I took them out of the washing machine.

It’s so hot that Satan went back to hell to cool down.

It’s so hot you need a spatula to remove your clothing.

It’s so hot fire ants are really on fire.

It’s so hot Siri asked to be dipped in a glass of ice water.

It’s so hot in the Apple store because they have no Windows.

It’s so hot my dream house in any house in Alaska.

It’s so hot all the sand on the beach is now glass.

It’s so hot my campfire lit itself.

It’s so hot the catfish are already fried when you catch them.

It’s so hot out, I baked lasagna in my mailbox.

It’s so hot the frozen pizza I bought at the grocery store was ready to eat by the time I got home.

It’s so hot out, I walked through a car wash to remember what rain felt like.

It’s so hot, that you could actually cook a full English breakfast on my forehead.

It’s so hot even the artificial flowers are dying.

It’s so hot, I went outside for a smoke and the cigarette lit itself.

It’s so hot, all the bread in the store is toast.

It’s so hot you discover that you can get a sunburn through your car window.

It’s so hot and humid outside, the air ironed the wrinkles out of my shirt.

It’s so hot the cows are producing evaporated milk.

Why don’t mummies ever take a summer vacation?

Why doesn’t summer have any friends?

Because it’s not cool enough.

Why are mountains the funniest places to go for summer vacation?

Because they are hill-arious!

Yo mama so poor, she waves around a Popsicle and calls it air conditioning.

Yo mama so hairy, people wonder why she wears a fur coat to a nude beach.

When we go to the beach with the kids, we use a really strong sunblock.

It’s SPF 80: You squeeze the tube, and a sweater comes out.

There was a guy on the beach with about 25 gorgeous chicks swarming all around him.

Seeing this, a second guy strolls on up to him and asks, “What’s your secret?” The guy whispers, “All you gotta do is stick a pickle in your pants.”

In a flourish, the second guy runs off and stuffs a pickle in his pants.

But when he returns to the shore, he soon discovers that every single girl that looks his way, runs off screaming in bloody terror.

Confused, he hurries over to the first guy and desperately asks, “Why are all the girls running away from me?”

The first guy looks up and replies, “The pickle’s on the wrong side.”

I asked my girlfriend if she’d like a day of eating ice cream and hanging out with her friends.

I said, “Good, because I’m breaking up with you.”

A woman asks a waiter, “What is this fly doing in my Ice cream?!”

My wife asked me if I ate the ice cream she had in the freezer.

I told her no. I ate it on the couch.

Just taught my kids about taxes by eating 38% of their ice cream.

Little Johnny had finished his summer vacation and gone back to school.

Two days later his teacher phoned his mother to tell her that he was misbehaving.

“Wait a minute,” she said. “I had Johnny with me for three months and I never called you once when he misbehaved.”

Wife: “I dreamed you gave me $500 for summer clothes last night. You would not spoil that dream, would you, Dear?”

Everyone during the summer tries to make sure they have an air conditioner.

But no one has any air shampoo.

I love summer in Canada!

It’s my favorite day of the year!

Why did the teacher wear sunglasses in class?

Because the class was so bright!

What does the sun drink out of?

What's the sequel to Mario Sunshine?