Enjoy our team's carefully selected Sleep Jokes. Laugh yourself and share the funniest jokes with your friends! 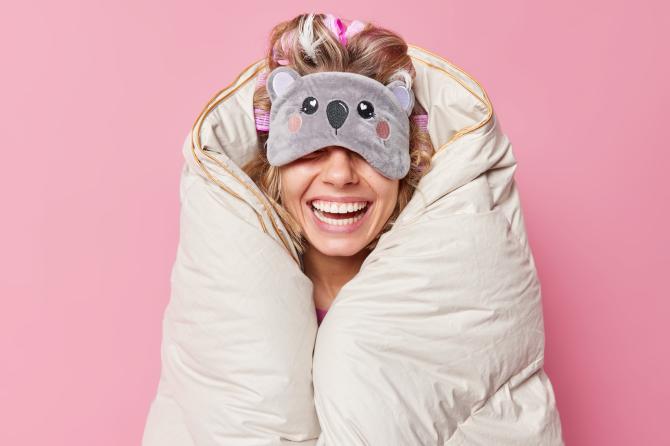 How do you get a baby alien to sleep?

Your mama so short, she sleeps in a mini house.

Scarlett Johansson is on a plane that crashes on a remote island.

She and some regular guy are the only two survivors.

They make the best of their situation, scavenge what supplies they can from the plane, and try to keep going.

They build a little hut on the beach and—both of them having certain “needs”—eventually start hooking up.

This keeps going as months turn into years and they fall in love.

One day she notices he looks depressed.

Scarlett says to him, “Listen, that plane crash was the best thing that ever happened to me because it means that the two of us are together. If there is anything at all I can do to cheer you up, please let me know.”

He tells her, “Actually, there is something. Put on a set of my clothes and tuck your hair up under one of my hats. Rub mud on your face so it looks like a beard and start walking down the beach.”

Scarlett thinks this is weird but, wanting to make him happy, goes along with it.

Once she gets about 200 yards down she turns around and sees her boyfriend running up to her shouting, “BRO! BRO! You’ll never believe who I’m sleeping with!”

Guess what you call a sleeping piece of paper?

The toast was having a sleepover. Guess what he was wearing?

It’s much more comfortable than sleeping in my cubicle.

“Good night, father of one,” she replies.

Football Player: “Coach, It is just not true!”

Coach: “What is not true, I trust the captain and I am asking this in front of him!”

Football player: “Coach, It is untrue that I was sleeping!”

Why is it impossible for students to sleep 8 hours every day?

Because school is only 6 hours a day!

An accountant is having a hard time sleeping and goes to see his doctor.

“Doctor, I just can’t get to sleep at night,” he says.

“Have you tried counting sheep?” inquires the doctor.

“That’s the problem. I make a mistake and then spend three hours trying to find it.”

Usually, when kids go to sleep they sleep with a teddy bear.

My teacher always tells me to follow my dreams, but she won’t let me sleep in class.

I want to die in my sleep like my grandfather, not screaming like the rest of the folks in his car.

A mom visits her son for dinner who lives with a girl as a roommate.

During his meal, his mother couldn’t help but notice how pretty his roommate was. She had long been suspicious of a relationship between the two and this had only made her more curious.

Over the course of the evening, while watching the two interact, she started to wonder if there was more between him and his roommate.

Reading his mom’s thoughts, his son volunteered, “I know what you must be thinking, but I assure you, we are just roommates.”

About a week later, his roommate came to him saying, “Ever since your mother came to dinner, I’ve been unable to find the silver plate. You don’t suppose your mother took it, do you?”

He sat down and wrote:

Several days later, he received an email from his mother which read:

Sherlock Holmes and Dr. Watson decide to go on a camping trip.

After dinner and a bottle of wine, they lay down for the night, and go to sleep.

Some hours later, Holmes awoke and nudged his faithful friend.

“Watson, look up at the sky and tell me what you see.”

“What does that tell you?”

Watson pondered for a minute.

“Astronomically, it tells me that there are millions of galaxies and potentially billions of planets.

Astrologically, I observe that Saturn is in Leo.

Horologically, I deduce that the time is approximately a quarter past three.

Theologically, I can see that God is all-powerful and that we are small and insignificant.

Meteorologically, I suspect that we will have a beautiful day tomorrow.

What does it tell you, Holmes?”

Holmes was silent for a minute, then spoke:

“Watson, you idiot! Someone has stolen our tent!”

What do you call a sleeping bull?