Enjoy our team's carefully selected Sailor Jokes. Laugh yourself and share the funniest jokes with your friends! 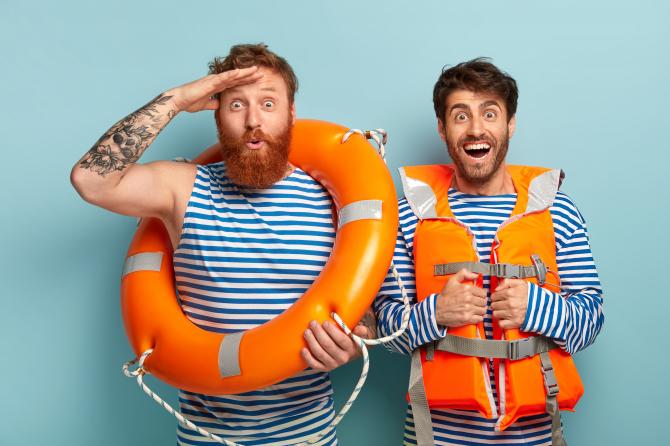 My wife was talking about funeral plans.

My Wife: “I said we’ll give you a military send off like the sailors on a ship.”

My Papa was a World War 2 Navy veteran, and he used to boast about how he saved 300+ sailors from dying from an excruciating death.

He shot the cook.

A sailor was drilling holes in an oligarch’s yacht.

A police officer approaches the sailor and asks him what he is doing.

The sailor puts down the drill and says, “Oh, me? Uhhhm... as a matter of fact, I am here to bless the ship.”

Sailor: “Yes, that’s right! I am making it very holy.”

One fine day, brave Captain Smith and his crew of sailors were sailing the ocean blue.

Suddenly, on the horizon, there loomed a ship with a skull and crossbones raised on the mast.

The crew was frantic, seeking refuge and asking the captain what to do.

Brave Captain Smith looked at the approaching ship for a moment and said, “Bring me my red shirt.”

The call was taken up at once by a cabin boy. As soon as Captain Smith had the shirt in his possession, he ordered the man at the wheel to head straight for the pirate ship. In the ensuing fight, the pirate ship was all but destroyed.

The sailors were recounting their individual triumphs afterward when someone asked Captain Smith why he had asked for his red shirt before the battle.

He responded, “If I was wounded, I did not want your confidence to wane. This way, you would keep fighting no matter what happened to me.”

The crew had a newfound admiration for its captain, and they talked all night about his bravery.

About a week later, there loomed on the horizon 10 pirate ships. Once again, the crew looked to its captain for leadership. Calmly, Captain Smith said, “Boys, bring me my brown pants!”

The crusty navy chief noticed a new face and barked at him, “Get over here! What’s your name, sailor?”

“Look, I don’t know what kind of foolishness they’re teaching sailors in boot camp these days, but I don’t call anyone by his first name!” the chief scowled.

“It breeds familiarity, and that leads to a breakdown in authority. I refer to my sailors by their last names only; Smith, Jones, Baker, Jackson, whatever.

And you are to refer to me as ‘Chief’. Do I make myself clear?!”

“Now that we’ve got that straight, what’s your last name?”

The seaman sighed, “Darling, My name is John Darling, Chief.”

Where do sailors go when they feel sick?

How do retired sailors greet each other?

Where do late sailors come from?

A sailor walks into a thrift store after he lost a limb to a giant octopus.

He said, “I heard this is a second-hand shop, where they at?”

What is a sailor’s least favorite vegetable?

What happens if you throw a Finnish sailor overboard?