Enjoy our team's carefully selected Pig Jokes. Laugh yourself and share the funniest jokes with your friends! 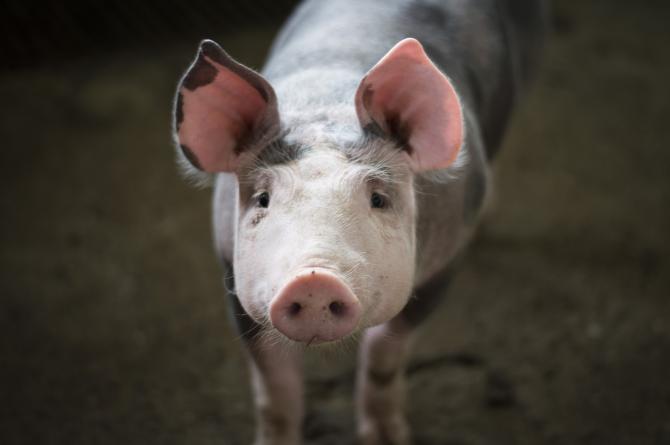 What do you call a pig thief?

What do you do when you see a severely injured pig that requires immediate medical attention?

A man drove by a farm every day on his way to work, and he always saw a pig in the front yard.

One morning on his way in, he noticed the pig had a wooden leg. It was odd, but he put it out of his mind.

A couple of weeks later, he saw the pig had a second wooden leg. No longer able to contain his curiosity, we stopped by the next day on his way home and knocked on the farmer’s door.

An old man answered, and he asked him about the pig with the wooden legs. The old man thought for a few minutes before answering.

“Well, son, let me tell you about this here pig.

One day I was out plowing in the back forty, and my tractor hit a rut. It tipped over and trapped me under it. I was pinned down and slowly pushed into the mud, where I knew I was going to be smothered and die.

This pig saw what happened, ran back to the farm, and made a huge ruckus. Then, when people came out to see what was going on, he led them to me.

Yep, that pig saved my life that day.”

The man agreed that was an amazing story, but he still didn’t understand about the wooden legs.

The old farmer thought some more, then told him another story.

“Well, a couple of nights ago, my wife and I were sleeping in the house when the barn caught fire. The wind was kicking up, and it was spreading to the main house.

If it weren’t for that there pig banging on the windows and squealing and raising Cain, we would have died in that fire.

Pig saved our lives, no doubt about it.”

The man was flabbergasted, “Sir, I will grant you that is a marvelous animal, but I still don’t understand why it has two wooden legs?”

The old farmer looked out into the yard and nodded to the pig, “Son, you must be a city boy, because everybody knows a pig that good, you don’t eat all at once.”

Who is Peppa Pig’s favorite painter?

What do you call bacon with salt on it?

Your mama so stupid, she put a watch in the piggy bank and said she was saving time.

What do you call a pig that does karate?