Enjoy our team's carefully selected Pharmacist Jokes. Laugh yourself and share the funniest jokes with your friends! 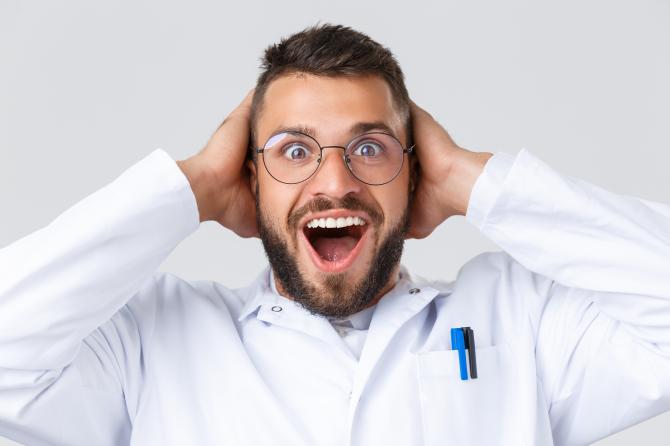 Upon arriving home, a husband was met at the door by his sobbing wife.

Tearfully she explained, “It’s the druggist. He insulted me terribly this morning, on the phone. I had to call multiple times before he would even answer the phone.”

Immediately, the husband drove downtown to confront the druggist & demand an apology.

Before he could say more than a word or two, the druggist told him, “Now, just a minute, listen to my side of it. This morning the alarm failed to go off, so I was late getting up. I went without breakfast & hurried out to the car, just to realize that I’d locked the house with both house and car keys inside and had to break a window to get my keys.”

“Then, driving a little too fast, I got a speeding ticket. Later, when I was about three blocks from the store, I had a flat tire.”

“When I finally got to the store a bunch of people were waiting for me to open up. I got the store opened and started waiting on these people, all the time the darn phone was ringing off the hook.”

He continued, “Then I had to break a roll of nickels against the cash register drawer to make change, and they spilled all over the floor. I had to get down on my hands and knees to pick up the nickels and the phone was still ringing.

“When I came up I cracked my head on the open cash drawer, which made me stagger back against a showcase with a bunch of perfume bottles on it. Half of them hit the floor and broke.”

“Meanwhile, the phone is still ringing with no let-up, and I finally got back to answer it. It was your wife. She wanted to know how to use a rectal thermometer. And believe me, mister, as God is my witness, all I did was tell her.”

A pharmacist looks out the front of the store and sees a woman holding a bottle jumping up and down in the parking lot.

The pharmacist walks out to the parking lot and asks the woman what’s the matter.

She replies, “I saw it said “Shake Well” after I took it.”

Lily went to a nearby pharmacy to buy her partner some deodorant.

A sales clerk comes up to her and asks what she’s looking for.

“I’m looking for some deodorant for my boyfriend, but I don’t know what kind he uses.”

My Sister works at a pharmacy.

Jacob, age 92, and Rebecca, age 89, living in Devon, are all excited about their decision to get married. They go for a stroll to discuss the wedding, and on the way, they pass a pharmacy. Jacob suggests they go in.

Jacob addresses the man behind the counter, “Are you the owner?”

Jacob: “We’re about to get married. Do you sell heart medication?”

Pharmacist: “Of course we do.”

Jacob: “Everything for heartburn and indigestion?”

Pharmacist: “We sure do.”

Jacob: “You sell wheelchairs and walkers and canes?”

Pharmacist: “All speeds and sizes.”

One day an Irishman called Seamus went into a pharmacy in Clonmel. He reached into his jacket pocket and took out a bottle of Irish whiskey and a teaspoon.

Seamus proceeded to pour some of the amber liquid into the teaspoon and offered it to the chemist.

“Could you taste this for me, please?” asked Seamus.

The chemist took the teaspoon, put it into his mouth, swilled the liquid around and swallowed it.

“Does that taste sweet to you?” says Seamus.

“No, not at all,” says the pharmacist.

“Oh that’s a relief,” says Seamus. “Doctor Flannigan told me to come here and get my urine tested for sugar.”

A man walks into a pharmacy and wanders up and down the aisles.

The salesgirl notices him and asks him if she can help him.

He answers that he is looking for a box of

feminine product for his wife.

She directs him down the correct aisle.

A few minutes later, he deposits a huge bag of cotton balls and a ball of string on the counter.

The sales girl says confused, “Sir, I thought you were looking for some

feminine product for your wife?”

He answers, “You see, it’s like this, yesterday I sent my wife to the store to get me a carton of cigarettes, and she came back with a tin of tobacco and some rolling papers; cause it’s so much cheaper. So, I figure if I have to roll my own... so does she.”

Pharmacists find their work to be very encapsulating.

A somewhat advanced society has figured out how to package basic knowledge in pill form.

A student, needing some learning, goes to the pharmacy and asks what kind of knowledge pills are available.

The pharmacist says, “Here’s a pill for English literature.”

The student takes the pill and swallows it and has new knowledge about English literature!

“What else do you have?” asks the student.

“Well, I have pills for art history, biology and world history,” replies the pharmacist.

The student asks for these, swallows them and has new knowledge about those subjects.

Then the student asks, “Do you have a pill for math?”

The pharmacist says, “Wait just a moment,” and goes back into the storeroom and brings back a whopper of a pill and plunks it on the counter.

“I have to take that huge pill for math?” inquires the student.

The pharmacist replied, “Well, you know... math always was a little hard to swallow.”

I just got a job at a pharmacy. The pay isn’t great...

But the percs are amazing!

Did you hear about the pharmacist who got hit with a bottle of omega 3?

They are okay, the injuries were superfishoil.

Two young boys walked into a pharmacy, picked out a box of

feminine product, and proceeded to the checkout counter.

The man at the counter asked the older boy, “Son, how old are you?”

The man continued, “Do you know what these are used for?”

The boy replied, “Not exactly, but they aren’t for me. They’re for him. He’s my brother. He’s four. We saw on TV that if you use these, you will be able to swim and ride a bike. Right now, he can’t do either.”

Pharmacist: A helper on the farm.

Lady says to pharmacist, “Why does my prescription medication have 40 side effects?”

Pharmacist replies, “Cause that’s all we’ve documented so far.”

A newborn pony walks into a pharmacy.

He asks the pharmacist, “Do you have any Cepacol lozenges? I’m a little hoarse.”

A pharmacist is going over the directions on a prescription bottle with an elderly patient.

“Be sure not to take this more often than every 4 hours,” the pharmacist says. “Don’t worry,” replies the patient. “It takes me 4 hours to get the lid off.”

The customer gets a topical cream.

The customer says to the pharmacist, “I can’t apply locally, I’m going overseas.”

My pharmacist recently lost his arm.

Now I call him my “phacist”.

A guy walks into a pharmacy: “I have extreme headaches, my belly cramps, I feel like I’m about to vomit and my back hurts like something tears the muscles apart. Do you have something?”

chemist walks into a pharmacy and asks the pharmacist, “Do you have any acetylsalicylic acid?”

“You mean aspirin?” asked the pharmacist.

“That’s it! I can never remember that word.”

What do you call a pharmacist working at a veterinary drug company?

How many pharmacists does it take to change a light bulb?

Just one, every six hours for the next ten days.

A pharmacist returns to his shop from lunch to find a man leaning against the wall.

“What’s wrong with him?” He asks his assistant.

“He came in for some cough syrup,” explains the assistant. “But I couldn’t find any, so I sold him a bottle of laxatives instead.”

“What!” The pharmacist says, horrified. “You can’t treat a cough with laxatives!”

“Of course you can,” the assistant declares. “Look at him – he’s far too scared to cough.”

A man goes into a pharmacy and asks the pharmacist if he can give him something for the hiccups.

The pharmacist promptly reaches out and slaps the man’s face.

“What did you do that for?” the man asks.

“Well, you don’t have the hiccups anymore, do you?”

The man says, “No, but my wife out in the car still does!”

A doctor is giving a talk at a symposium. Like any good public speaker, he wrote his speech out on notecards.

Unfortunately, when he gets up to the podium, he finds that he just can’t read his notes.

So, he says to the audience, “Is there a pharmacist in the house?”

Conversation between a pharmacist and a female customer.

Woman: “I need to buy some arsenic.”

Pharmacist: “Why do you need arsenic?”

Woman: “I need arsenic because I want to give it to my husband.”

Woman: “You heard me! I want to give it to my husband!”

Pharmacist: “Why on earth would you want to do that?”

Woman: “Because he’s having an affair with YOUR wife!!!”

Pharmacist: “Well why didn’t you tell me you had a prescription?”