Enjoy our team's carefully selected Pancake Jokes. Laugh yourself and share the funniest jokes with your friends! 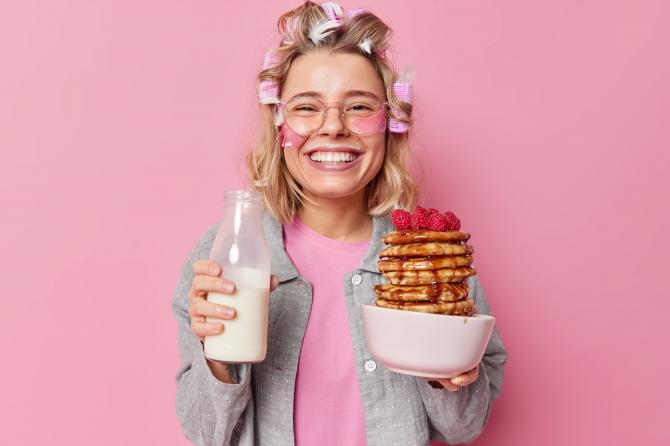 A boy was feeling very nervous about his first date, so went to his father for advice.

Father: “My son, there are three subjects that always work with women: food, family, and philosophy.”

The boy picks up his date, and they stare at each other for a long time.

The boy’s nervousness builds, but he then asks, “Do you like potato pancakes?”

“No,” comes the answer, and the silence returns like a suffocating blanket.

After giving it some thought, the boy plays his last card, “If you had a brother, would he like potato pancakes?”

Went to a pancake restaurant, and asked if my dinner would be long.

The waiter replied, “No, sir, round.”

If anyone else makes a bad joke about ‘tossing’ on Pancake Day...

I dreamed last night that I was making pancakes whilst driving along a twisty road.

I tossed and turned all night.

Psychiatrist: “What brought you here?”

Patient: “My wife sent me here because I like pancakes.”

Psychiatrist: “There’s nothing wrong with that, I like pancakes, too.”

Patient: “Excellent! Come to my place, I have seven suitcases full of them!”

My wife makes my pancakes too thin.

Tomorrow morning I am telling her I am sick of her crepe.

A man returns to the U.S. from Africa feeling very ill.

He goes to see his doctor, and is immediately rushed to the hospital, to undergo a barrage of extensive tests.

The man wakes up after the tests in a private room at the hospital, and the phone by his bed rings.

“This is your doctor. We’ve had the results back from your tests, and we’ve found you have an extremely nasty flu virus, which is extremely contagious!”

“Well, we’re going to put you on a diet of pancakes and pita bread.”

“Will that cure me?” asked the man, hopefully.

The doctor replied, “Well, no, but... it’s the only food we can get under the door.”

A Mormon mother was preparing pancakes for her sons—Owen, 5, and Bill, 3.

The boys began to argue over who would get the first pancake.

Their mother saw the opportunity for a moral lesson.

If Jesus were sitting here, He would say, “Let my brother have the first pancake. I can wait.”

Owen turned to his younger brother and said, “Bill, you be Jesus.”

Yo mama so fat, she sweats butter and syrup, and has a full time job at Denny’s wiping pancakes across her forehead.

What do the New York Yankees and pancakes have in common?

They both need a good batter!

What do neckbeards put on their pancakes?

There are three moles at the bottom of their mole hole.

The first mole—daddy mole—wakes up, climbs to the top, sticks his nose out, and says, “Mmmmm... I smell bacon!”

Mommy mole wakes up. She climbs to the top, sticks her nose out, and says, “Mmmmm... I smell pancakes!”

Baby mole wakes up. He climbs up but gets stuck behind his mom and dad.

He takes a big whiff and says, “All I can smell is molasses!”