Enjoy our team's carefully selected Old Man Jokes. Laugh yourself and share the funniest jokes with your friends! 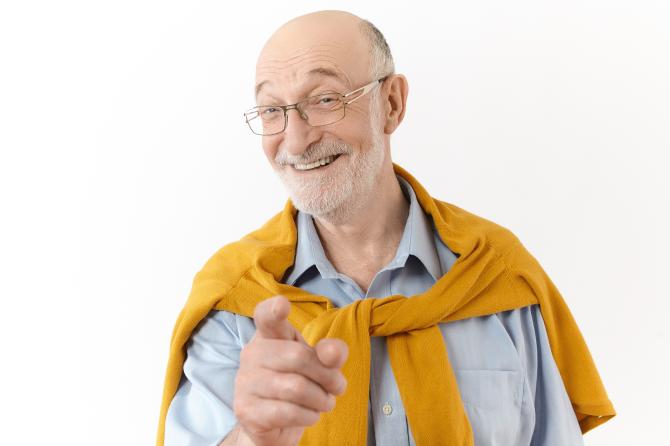 Two men were walking home after a Halloween party and decided to take a shortcut through the cemetery just for laughs.

Right in the middle of the cemetery, they were startled by a tap-tap-tapping noise coming from the misty shadows.

Trembling with fear, they found an old man with a hammer and chisel, chipping away at one of the headstones.

“Holy cow, Mister,” one of them said after catching his breath, “You scared us half to death — we thought you were a ghost! What are you doing working here so late at night?”

“Those fools!” the old man grumbled. “They misspelled my name!”

There was a young pregnant woman. Her dream was for her baby to grow up with perfect manners.

She went to the doctor and asked him how she could make her baby nicer, and he told her to sit down for an hour a day and teach her stomach manners, to prep him or her before the baby is even born.

So every day for the next 9 months, the woman would sit quietly and tell her belly, “Be nice to other people, always put others first, and always say please, and thank you.”

She never missed a day in 9 months, and the due date came and went, no baby!

The woman continued to wait for her newborn and continued to teach her belly manners and politeness every day, but as days, weeks, months, and years passed, the baby never came!

Finally, 65 years later when the woman finally passed away in her sleep, the doctors performed an autopsy on her body.

They cut open her belly and found 2 little old men with big long white beards, continually saying to each other:

I was in my garden when I got the news that my father had fallen from a 20 feet ladder and was in the hospital.

I rushed to the hospital expecting that my father had some major fractures, but he was alright except for some minor cuts.

When I told him that it was a miracle, he disagreed and told me, “Son, I had just fallen from the first step of the ladder.”

What would the Terminator be called in his retirement?