Enjoy our team's carefully selected Ice Cream Jokes. Laugh yourself and share the funniest jokes with your friends! 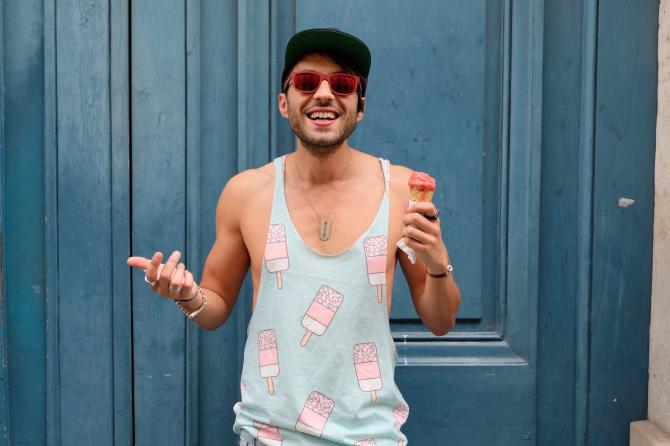 I wish I had as much hope as the guy driving the ice cream truck around in February.

You can’t buy happiness, but you can buy ice cream, which is kinda the same thing.

Just went to the store and bought milk, cereal, juice and ice cream.

Cashier: “You must be single, right?”

A bear walks into an ice cream shop.

Ice cream man: What can I get for ya?

Ice cream man: Alright! One scoop of chocolate chip coming right up! By the way, what’s with the pause?

Have you ever seen something so attractive and so hot that it makes you melt like ice cream when you see try to get close to it?

A penguin sent his car to the mechanic before going to the ice cream shop.

He ordered vanilla ice cream and gobbles it down before going back to the mechanic.

The ice cream parlor asks for my order.

Parlor: “Hello Sir, can I take your order?”

Me: “Yes, I’d like a male hot fudge sundae please.”

A beaver is eating an ice cream. He has a sour look on his face.

“I wish I’d reached the stick already,” he mumbles to himself.

Somebody walks into an ice cream parlor and asks, “What flavors do you have?”

The attendant says, “Over there on the signs on the wall, you’ll see them all.”

When I was a kid you could walk into a shop with a quarter and come out with 2 cokes, 3 bags of chips, 2 chocolate bars and an ice cream.

A man goes to an ice cream stall in Siberia.

The owner asks, “Which type of ice cream? The ice cream from the freezer, or the ice cream on the display cabinet?”

The man replies, “The one in the freezer, I’m pretty sure it’s warmer in there.”

Got an ice cream for my girlfriend.

Best trade I ever made.

At a party, a young wife admonished her husband, “That’s the fourth time you’ve gone back for ice cream and cake. Doesn’t it embarrass you?”

“Why should it?” answered her spouse. “I keep telling them it’s for you.”

The cast of The Wizard of Oz go out for ice cream.

The Lion stops licking his cone, yelling, “Ouch!” and gripping his temples.

The Tinman stops licking his cone, yelling, “Ouch!” and gripping his temples.

The Scarecrow says, “What’s the matter with you guys?”

I asked my girlfriend if she’d like a day of eating ice cream and hanging out with her friends.

I said, “Good, because I’m breaking up with you.”

A woman asks a waiter, “What is this fly doing in my Ice cream?!”

Just taught my kids about taxes by eating 38% of their ice cream.

I once saw a ghost made of chocolate and vanilla.

Walking down the road last night, I passed an apple pie, an ice cream sundae and a lemon cheesecake.

I thought, “The streets are strangely desserted tonight.”

Do you want to get a sundae?

No, thanks, it’s only Thursday.

How do astronauts eat their ice creams?

I tried looking up ice cream puns on the Internet but then my browser froze.

A day without ice cream is practically un-cone-stitutional.

Why does everyone invite ice cream to the party?

Why did the ice cream truck break down?

Because of the rocky road.

Took my girlfriend to the ice cream factory and she fell into the Gelato machine.

Why do British ice cream cones carry an umbrella?

There’s always a chance of sprinkles.

What do you get from an Alaskan cow?

What did the newspaper say to the ice cream?

How did Reese eat her ice cream?

How do you make the ice cream more expensive?

Just put it in the fridge longer. It will turn into a Cold Stone.

I sold a thousand CDs but only made enough money to buy one ice cream.

Probably because each CD was Milli Vanilli.

Did you hear about the private who could shit ice cream? He deserted his post.

An ice cream, a creme brulee and a slice of cheesecake joined the army, but they abandoned their fellow soldiers on their first deployment.

They are wanted for dessertion.

I was offered a job at the local ice cream shop, but I turned it down.

Ice Cream gets tested positive for Covid in China.

I hope they’ve put it straight into iceolation.

Where does Goku keep his ice cream?

What’s the motto of an ice cream shop in paradise?

What did Ernie say when Bert asked if he wanted ice cream?

I have a lactose intolerant friend who sells ice cream for a living.

He can’t take it, but he can dish it out.

My wife asked me if I ate the ice cream she had in the freezer.

I told her no. I ate it on the couch.

How do you describe Neapolitan ice cream to someone?

Your two favorite flavors plus strawberry.

What giant dog is made of strawberry, vanilla and chocolate ice cream?

I think he has a Neapolitan complex.

What is a monster’s favorite part of a birthday celebration?

Where do kids get ice cream cakes on their birthdays?

What did the snowman say to the birthday girl?

Have an ice day!

What did the birthday cake say to the ice cream?

What did the ice cream say to the grumpy birthday cake?

How do you wish an ice cream a happy birthday?

“Hope your birthday is gelato fun!”

“Tobias some nice cold ice cream, you need some money.”

“Ox me nice and I will take you out for ice cream.”

“Ice cream every time I see a ghost!”

“I scream, you scream, we all scream for ice cream!

“Ice cream if you throw me in the cold, cold water!”

“Water you waiting for... Let’s get out the ice cream!”

You put the ‘hot’ in hot fudge sundae.

You must be frozen yogurt, because I want to spoon you.

You must be a gelato, because you make ice creams look bad.

You could never be ice cream, because you are too hot!

It must be hot in here, because you’re making me melt.

If you were ice cream, you would be my favorite flavor.

I want you more than a Hagen-Daas on a hot summer day.

I melt with you.

I love you more than ice cream.

I brought you a small spoon, in case you wanted to sample my flavor.

Can I have a waffle cone, and 2 scoops of you?

Call me a dentist, because you are too sweet.

Are you made of ice cream?

Because I can’t wait to eat you up!

A young boy walks into an ice cream parlor and asks for 12 scoops of ice cream.

In disbelief, the cashier asked him to repeat his order.

Not passing this huge order up the cashier went to work making sure the scoops were evenly balanced and could not tip over.

But before handing it over to him he asked the boy a question, “Why did you want so many scoops of ice cream?”

“Well, if you had what I had you would order the exact same thing.”

The cashier hands him the cone but he’s a little confused and asked another question.

“And what is it that you have that I don’t?”

The boy looked him in the eyes with a smirk on his face and said, “Only two dollars in change.” And he ran out of parlor.

One day this kid walks into an ice cream parlor and asks the guy behind the counter, “Do you have onion-flavored ice cream?”

The guy says, “No, we don’t have onion-flavored ice cream.”

The next day, the kid comes back in and asks the same question.

The guy again informs him that they don’t carry onion-flavored ice cream.

This goes on for a week, and the guy running the ice cream shop figures the kid is probably autistic.

Then, the next morning, when the kid comes in at his usual time and asks if they have onion-flavored ice cream, the guy answers him.

The kid replies, “You must be stupid. Who is gonna buy onion-flavored ice cream?!”

A young boy enters a barber shop and the barber whispers to his customer, “This is the dumbest kid in the world. Watch while I prove it to you.”

The barber puts a dollar bill in one hand and two quarters in the other, then calls the boy over and asks, “Which do you want, son?”

The boy takes the quarters and leaves.

“What did I tell you?”, said the barber. “That kid never learns!”

Later, when the customer leaves, he sees the same young boy coming out of the ice cream store.

“Hey, son! May I ask you a question? Why did you take the quarters instead of the dollar bill?”

The boy licked his cone and replied, “Because the day I take the dollar, the game is over!”