Enjoy our team's carefully selected Hot Dog Jokes. Laugh yourself and share the funniest jokes with your friends! 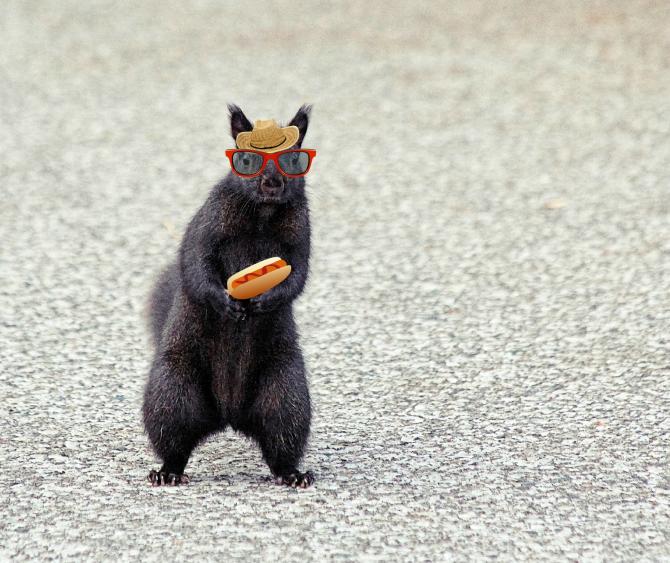 A hot dog in one of his ears, a pretzel in the other ear, and a nacho chip in one nostril.

A Buddhist monk, visiting New York City for the first time in twenty years, walked up to a hot dog vendor, handed him a twenty-dollar bill, and said, “Make me one with everything.”

The vendor pocketed the money and handed the Buddhist monk his hot dog.

The monk, after waiting for a moment, asked for his change.

The vendor looked at him and said, “Change comes from within.”

Me, at the hot dog stand: “Can I get a jumbo sausage?”

The hot dog asked his friend, “Have you been to the German nightclub yet?”

His friend hadn’t, it was too krauted.

A hot dog and a hamburger walk into a bar.

The bartender immediately tells them, “I’m sorry, but we don’t serve food here.”

A blond goes up to the librarian.

Librarian: “Sorry, Madam, but this is a library.”

A yam and a hot dog are having a heart-to-heart.

Customer: “Give me a hot dog.”

Customer: “No, with sauerkraut!”

On the way home from a hunt, a hunter stops by the grocery store.

“Give me a couple of steaks,” he says.

“We’re out of steaks, but we have hot dogs and chicken,” says the butcher.

Son: “Dad, why did you and mom name my sister Rose?”

Dad: “Because your mother loves Roses.”

I go to the store and buy ten hot dogs, nine burgers, three bags of chips, and six sodas.

If I eat nine hot dogs, seven burgers, three bags of chips, and drink five sodas, what do I have?

A hot dog vendor brings a homeless man to court for standing near the stand and enjoying the smell of the meat as he ate his bread.

The judge is quite exasperated.

Judge to the homeless man: “Do you deny this?”

Homeless man: “No, your honor.”

Judge: “Do you have any coins?”

Judge: “Give them here.”

Homeless man: “Your Honor, they’re all I have!”

Judge: “That may be so, but please just give me those coins.”

Judge to the stand owner: “Pay close attention.” Drops coins on the table. “Did you hear that?”

Judge: “Excellent. Now you take the sound of those coins as payment for the smell of the meat.”

A man was sitting on a park bench eating a hot dog.

A woman with a small dog walked up to sit on another bench across from the man. Almost immediately, the little dog began barking incessantly at the man while he ate.

The man asked, “Would you mind if I throw him a bit?”

“Not at all,” the woman replied.

The man picked the dog up and tossed him over a wall.

Two immigrants have just arrived in the United States and one says to the other, “I hear that the people of this country actually eat dogs.”

“Odd,” her companion replies, “but if we shall live in America, we might as well do as the Americans do.”

Nodding emphatically, one of the immigrants points to a hot dog vendor and they both walk toward the cart.

The vendor is only too pleased to oblige, wraps both hot dogs in foil and hands them over the counter.

Excited, the companions hurry to a bench and begin to unwrap their “dogs”.

One of them opens the foil and begins to blush.

Staring at it for a moment, she turns to her friend and whispers cautiously, “What part did you get?”

I won my 17th straight Halloween costume contest as a hot dog.

I think German sausages are the wurst!

I let my kids pick my Halloween costume this year.

They chose a hot dog... this is going to be my wurst Halloween ever.

I finally was chosen to pick toppings for the hot dogs!

I relished the opportunity!

There are no losers when eating hot dogs.

If you don’t like hot dogs, I think you’re the wurst.

Let me be frank, I love the summer.

The family got completely lost on their journey to the hot dog stand.

They took a turn for the wurst.

So hot dog, we meat again.

Went to a hot dog convention hoping to meet some women.

But it turned out to be a sausage fest.

I might have to reconsider my kosher hot dog business...

For some reason, Anne’s Franks hasn’t been very popular with the target audience.

Last, I declare you the weiner of the food contest.

Every oven in the greasy hot dog restaurant was broken.

So the diners got a raw deal.

I stepped into my shower today only to find hot dogs coming out of the shower head.

My plumber calls it a “meatier shower”.

Hot dogs really should be renamed to hot wolves... They always come in packs.

I just had a very serious discussion about hot dogs...

It was a frank discussion.

A good friend of mine—Frank—owns and operates a struggling Hot Dog business.

He recently turned to social media to help boost sales though and is determined to make every post a weiner.

I have an idea for a make-your-own hot dog place.

It’s called “What’s the Wurst That Could Happen?”.

I was eating a hot dog the other day and when I took a bite, ketchup squirted in my eye...

Hot dogs and I have a very frank relationship!

She got fired from the hot dog stand for putting her hair in a bun.

My girlfriend asked me if hot dogs were good for her diet.

I replied, “They’re not the wurst.”

I took a road trip with my German buddy and when I accidentally dropped my hot dog out the window he swung the car around to go back and get it. . .

That’s when the whole trip really took a turn for the wurst.

The most loyal, kind and noble of all dog breeds is the hot dog.

He’s the only one who feeds the hand that bites him.

They brought the hot dog in for questioning.

What did the burger do when he ate his enemy the hot dog?

Did you hear about the hot dog stand on the moon?

The hot dogs were out of this world, but there was absolutely no atmosphere.

Why did the disgruntled hot dog vendor quit his job?

He just didn’t relish it.

What do you call a dog with a fever?

What do you HAVE to put on your hot dogs?

Why do Germans fear getting cheese in their hot dogs?

Because for them it’s considered to be a Wurst-Käse scenario.

What did the American hot dog say to the German hot dog?

Why does a dog stay in a shadow?

Because it doesn’t want to be a hot dog.

What’s the best thing to put on a hot dog?

Water, to cool him down.

Why did the hot dog dress up?

It felt a little halloweenie.

What did the man do when he saw a hot dog?

He put it in the shade.

What do you call a sea of hot dogs?

What is the best way to enjoy a hot dog?

What did the people call the bad hot dog stand?

What do you call a guy with no arms and legs in a hot dog bun?

Why do all hot dogs look the same after coming off the grill?

Because they are in-bred.

What did the mom say when her kid dropped their hot dog?

It could always be wurst!

How do you make a hot dog stand?

Take away its chair.

When do franks tell insults?

At a wienie roast.

How does the enthusiastic man eat his hot dog?

What do you call a saw that cuts hot dogs?

Have you ever been to a hot dog factory?

No, I haven’t sausage a place.

Why did the vegetarian hot dog cross the road?

To prove he wasn’t chicken!

What do you call a candid hot dog?

What was the taxidermist doing at the hot dog stand?

How did the hot dog ask the ketchup out?

He mustard up the courage.

What do you call a claim that a guy could eat a foot long hot dog in two bites?

Why does ketchup on hot dogs spoil early?

Why was the man holding a bottle of ketchup?

Because it was raining cats and hot dogs.

What do you call a hot dog race?

When does a hot dog have a close shave?

Where do you smart hot dogs go?

On the honor role.

What do you call a frozen frankfurter?

What did the Mama Hot Dog say to the little frankfurter?

What did Alex say to his college roommate to get him to stop working on his college essay and come out for hot dogs?

Why are German hot dogs the most controversial?

It’s because they make the best and the wurst ones.

What did the hot dog say when it crossed the finish line?

Why does a Chicago-style hot dog always lose races?

Because it refuses to ketchup.

What does a man consider a seven-course meal?

A hot dog and a six-pack of beer.

What do you call a hot dog with nothing inside it?

Did you see the movie about the hot dog?

It was an Oscar Wiener.

What did the constipated hot dog say?

What do you give a dog with a fever?

Mustard because it’s the best thing for a hot dog.

Let’s be Frank, you’re probably planning to party your buns off, so go ahead – don’t be a weenie!

Relish every moment of your celebration!