Enjoy our team's carefully selected Haircut Jokes. Laugh yourself and share the funniest jokes with your friends! 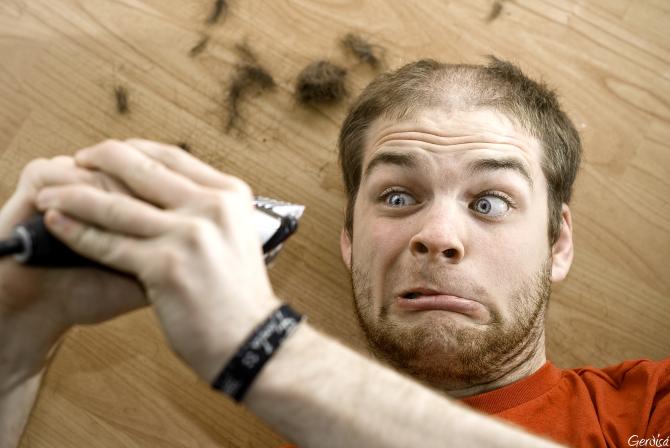 Why was everyone keeping their food on my friend’s head?

He had got a bowl cut!

One day the queen wanted a haircut.

No barber in England would do it. Why?

How does Tom Brady have a bad haircut before every game?

He always asks for the Super “Bowl Cut”.

Why are haircuts so cheap in Morocco?

Because they’ve got so many Berbers!

What do you call a line of men waiting to get a haircut?

What haircut does a Rastafarian ask for when he is questioning life?

How does the moon cut its hair?

I work at a barber shop and I recently started giving free eyebrow trims to anyone that got a haircut.

I got a haircut today, but I’m never going back to that barber.

I asked for one hair cut, and he cut all of them.

My wife gave me a haircut on the balcony outside today.

Cleanup was a breeze.

Haircuts are great because I did none of the work, but get all the credit.

My friend said that my haircut makes me look like a rooster.

I said it’s a cock-a-doodle do.

Thought I saw my first super hero today. He was sprinting down the street wearing a cape.

Turns out, he hadn’t paid for his haircut.

I saw my wife using her phone to record her getting a haircut.

I think she’s planning to watch the highlights later.

My barber wanted me to sign a long-term service agreement before giving me a haircut, but I refused.

I couldn’t accept all those perms and conditions.

I gave my pet bird a haircut and now he thinks he’s James Bond.

Well, I suppose he is a Shorn Canary.

I just paid for a full haircut, conditioner, neck and scalp massage, face shave and then mustache trim and wax.

It’s my wife’s birthday and I thought, “What the hell! I’ll treat her.”

I hated my haircut at first...

But now it’s starting to grow on me.

My girlfriend was crying because she got a bad haircut.

I said, “Why are you crying? I’m the one that has to find a new girlfriend.”

The best part about working in an office is that if you ever forget that you got a haircut, someone will definitely point it out to you.

A man walks into a barbershop and asks, “How much for a haircut?”

“All right,” says the man, settling into the barber chair. “Shave my head.”

A man and a little boy entered a barbershop together.

After the man received the full treatment—shave, shampoo, manicure, haircut, etc.—he placed the boy in the chair.

When the boy’s haircut was completed and the man still hadn’t returned, the barber said, “Looks like your daddy’s forgotten all about you.”

A businessman is driving through a small town, on his way to an important presentation, when he realizes he needs a haircut and doesn’t have much extra time.

He remembers there’s a little barbershop on the corner so he stops, and a short while later he’s back on his way.

A week or two passes, and he pulls into the little barbershop again.

“Oh, I’d like another haircut, but I’m awfully particular. Can I make a few requests this time?”

“Of course,” says the barber. “Anything you want. Take a seat.”

The businessman sits down.

“Well, for starters, I want you to cut my right sideburn an inch shorter than my left.

For my mustache, I want the sides chopped so it looks a little like Hitler’s.

Cut the hair on the nape of my neck at a 5-degree angle instead of straight across. Make sure to give me a slight cowlick.

I want my hair parted on the left, but unevenly.

Cut exactly two little divots out on the back of my head.

When you use the clippers, I want the two sides slightly different lengths.

Blend the sides in, but don’t blend in the back.

And when you put the hair gel in, comb the front straight forward and the hair on the top of my head to the rear.”

The barber is taken aback by all these odd requests.

“Why not?” the businessman asks. “That’s what you did last time.”

A man was getting a haircut before a trip to Rome.

He mentioned the trip to his barber who responded, “Rome? Why would anyone want to go there? It’s crowded and dirty and full of tourists. You’re crazy to go to Rome. So, how are you getting there?”

“We’re taking American Airlines,” was the reply. “We got a great rate!”

“American Airlines?” exclaimed the barber. “That’s a terrible airline. Their planes are old, their flight attendants are ugly and they’re always late. So where are you staying in Rome?”

“We’ll be at the downtown International Marriott.”

“That dump? That’s the worst hotel in the city. The rooms are small, the service is surly and they’re overpriced.

So whatcha’ doing when you get there?”

“We’re going to go see the Vatican and we hope to see the Pope.”

“That’s rich,” laughed the barber. “You and a million other people trying to see him. He’ll look the size of an ant. Boy, good luck on this lousy trip of yours.

You’re going to need it.”

A month later, the man again came in for his regular haircut.

The barber asked him about his trip to Rome.

“It was wonderful!” explained the man, “Not only were we on time in one of American Airlines brand new planes, but it was overbooked and they bumped us up to first class. The food and wine were wonderful, and I had a beautiful 28-year-old stewardess who waited on me hand and foot.

And the hotel—it was great! They’d just finished a $25 million remodeling job, and now it’s the finest hotel in the city. They, too, were overbooked, so they apologized and gave us the presidential suite at no extra charge!”

“Well,” muttered the barber, “I know you didn’t get to see the Pope.”

“Actually, we were quite lucky, for as we toured the Vatican, a Swiss Guard tapped me on the shoulder and explained that the Pope likes to personally meet some of the visitors, and if I’d be so kind as to step into his private room and wait, the Pope would personally greet me.

Sure enough, five minutes later the Pope walked through the door and shook my hand! I knelt down as he spoke a few words to me.”

“He said ‘Where’d you get the crappy haircut?’”

A priest walked into a barber shop in Washington, D.C.

After he got his haircut, he asked how much it would be.

The barber said, “No charge. I consider it a service to the Lord.”

The next morning, the barber came to work and there were 12 prayer books and a thank you note from the priest in front of the door.

Later that day, a police officer came in and got his hair cut. He then asked how much it was.

The barber said, “No charge. I consider it a service to the community.”

The next morning, he came to work and there were a dozen donuts and a thank you note from the police officer.

Then, a Senator came in and got a haircut. When he was done he asked how much it was.

The barber said, “No charge. I consider it a service to the country.”

The next morning, the barber came to work and there were 12 Senators in front of the door.

Marley stopped at the town barbershop for a haircut.

After thirty-five minutes of snipping and cutting, the barber held a mirror behind Marley’s head.

“Real fine,” said the redneck. “But how about making it a little longer in the back?”

A balding man was getting a haircut.

The man’s barber said, “Do you know what they say if you’re bald in the front?”

Barber: “They say you’re a thinker.”

Barber: “Do you know what they say if you’re bald in the back?”

Barber: “They say you’re a lover.”

The man perked up.

Man: “What do they say if you’re bald in the front and the back?”

Barber: “That you only think you’re a lover.”

A young boy enters a barber shop and the barber whispers to his customer, “This is the dumbest kid in the world. Watch while I prove it to you.”

The barber puts a dollar bill in one hand and two quarters in the other, then calls the boy over and asks, “Which do you want, son?”

The boy takes the quarters and leaves.

“What did I tell you?”, said the barber. “That kid never learns!”

Later, when the customer leaves, he sees the same young boy coming out of the ice cream store.

“Hey, son! May I ask you a question? Why did you take the quarters instead of the dollar bill?”

The boy licked his cone and replied, “Because the day I take the dollar, the game is over!”

When Thompson hit seventy, he decided to change his lifestyle completely so that he could live longer.

He went on a strict diet, he jogged, he swam, and he took sunbaths.

Svelte and tan, he decided to top it all off with a sporty new haircut. Afterward, while stepping out of the barbershop, he was hit by a bus.

And a voice from the heavens responded, “To tell you the truth, Thompson, I didn’t recognize you.”

A guy goes into a bar in the middle of the day.

It’s quiet and practically deserted. He sits alone, thinking about the twists and turns his life has taken.

He looks around, but he doesn’t see anyone.

He waves over to the bartender to ask her if she hears anything.

Since quarantine I’ve not had a haircut. Hell, I’ve not even stepped on the scales.

So today I decided to weigh myself for the first time in months.

Who knew hair weighed so much?!