Enjoy our team's carefully selected God Jokes. Laugh yourself and share the funniest jokes with your friends! 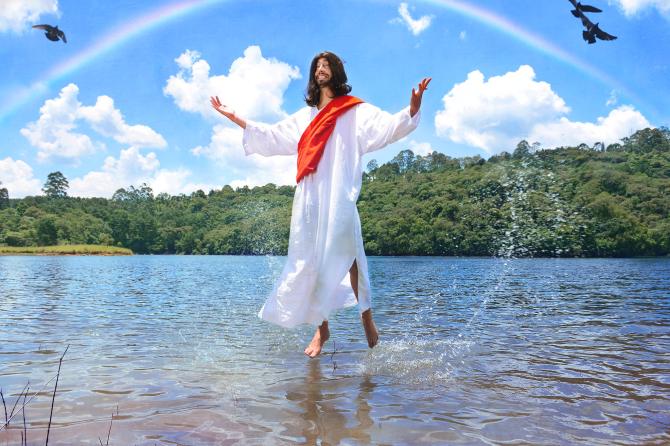 A woman hurried to a pharmacy to pick up the medication.

When she got back to the car, she found her keys locked inside.

The woman found an old rusty coat hanger on the ground.

She looked at it and said, “I don’t know how to use this.”

She bowed her head and asked God to send her some help.

Within five minutes an old motorcycle pulled up, driven by a bearded man who was wearing an old biker skull rag. He got off his cycle and asked if he could help.

She said, “Yes, my husband is sick. I forgot my keys in the car. Can you use this hanger to unlock my car?”

He walked over to the car, and in less than a minute the car was open.

She hugged the man and through tears said, “Thank you, God, for sending me such a very nice man.”

The man heard her little prayer and replied, “Lady, I am not a nice man. I just got out of prison yesterday; I was in prison for car theft.”

The woman hugged the man again, sobbing, “Oh, thank you, God! You even sent me a professional!”

The first one to tee off is Moses. He smashes the ball and it is heading right for the water hazard before the green.

Moses raises his club, the water parts, and the ball makes it to the green.

Jesus gets up to swing, cranks it out, and it is headed for the water hazard.

Jesus closes his eyes and prays. The ball skips across the water and lands on the green two feet from the hole.

The old man’s turn comes and he drives the ball.

The ball looks like it is going to drop directly into the water. A fish jumps from the water hazard swallowing the ball, as an eagle drops from the sky, grabbing the fish.

As the eagle flies over the green, a bolt of lightning strikes the eagle, making it drop the fish.

As the fish hits the green, it spits out the ball and the ball falls into the hole, making a hole in one.

Jesus looks at Moses and says, “I really think I’m leaving Dad at home next time!”

When Thompson hit seventy, he decided to change his lifestyle completely so that he could live longer.

He went on a strict diet, he jogged, he swam, and he took sunbaths.

Svelte and tan, he decided to top it all off with a sporty new haircut. Afterward, while stepping out of the barbershop, he was hit by a bus.

And a voice from the heavens responded, “To tell you the truth, Thompson, I didn’t recognize you.”

As he ascends to heaven, he begins to get worried that he might be wrong about atheism.

He gets even more worried when he finally reaches heaven, and it looks just like how all those religious people said it would.

Then an old man with a big white beard comes up to him, and says, “I’m God, looks like you were wrong about me.”

Nietzsche replies, “Not at all. If you’re up here in heaven, that just proves everything that I wrote is correct. God is dead!”

A racist man called me a terrorist for having long hair, a long beard, and being Middle Eastern.

Later I saw him at church giving a speech about how everyone needs a Middle Eastern guy with long hair and a beard in their lives.

Why do people say donuts are made by God?

Because they are hole-y.

Yo mama so tall, when she did a backflip, she digs God in the face.

But alas, after a fierce backhand from the nun, the priest misses and again yells: “Goddamn it! I missed!”

A kindergarten teacher was observing her classroom of children while they drew. She would occasionally walk around to see each child’s artwork.

As she got to one little girl who was working diligently, she asked what the drawing was.

The teacher paused and said, “But no one knows what God looks like.”

Without missing a beat, or looking up from her drawing the girl replied, “They will in a minute.”

Man: “God, why did you make woman so beautiful?”

In the beginning, God created the earth and rested.

Then God created Man and rested.

Since then, neither God nor Man has rested.

They ignore my existence unless they want something from me.

If God really made everything…

Eventually, his brother found him and asked, “What’s wrong?”

A guy is late for an important meeting. But he can’t find a place to park. In desperation, he begins to pray:

“Please Lord, if you help me find a parking stall right now, I promise to go to church every Sunday and never drink vodka again!”

A moment later, he sees a beautiful empty spot right next to the entrance.

A bus full of ugly people had a head-on collision with a truck.

When they died, God granted all of them one wish.

The first person said, “I want to be gorgeous.”

God snapped his fingers and it happened.

God noticed the last man in line was laughing hysterically.

By the time God got to the last ten people, the last man was laughing and rolling on the ground.

When the man’s turn came, he laughed and said, “I wish they were all ugly again.”