Enjoy our team's carefully selected Fighting Jokes. Laugh yourself and share the funniest jokes with your friends! 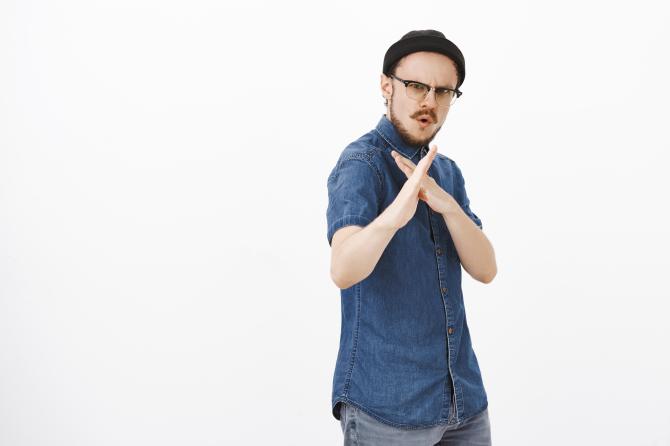 A stormtrooper and a redshirt get into a fight.

The stormtrooper missed every shot.

On a tour of Florida, the Pope took a couple of days off to visit the coast for some sightseeing. He was cruising along the beach in the Pope-mobile when there was a frantic commotion just off the shore.

A helpless man, wearing a Montreal Canadiens jersey, was struggling frantically to free himself from the jaws of a 25-foot shark.

As the Pope watched, horrified, a speedboat came racing up with three men wearing New York Rangers’ jerseys aboard.

One quickly fired a harpoon into the shark’s side, while the other two reached out and pulled the bleeding, semiconscious Canadiens fan out of the water. Then, using baseball bats, the three heroes in blue beat the shark to death and hauled it into the boat as well.

Immediately, the Pope shouted and summoned them to the beach.

“I give you my blessing for your brave actions,” he told them. “I heard that there was some bitter hatred between Rangers and Canadiens fans, but now I have seen with my own eyes that this is not the truth.”

As the Pope drove off, the harpooner asked his buddies, “Who was that?”

“It was the Pope,” one replied. “He is in direct contact with God and has access to all of God’s wisdom.”

“Well,” the harpooner said, “he may have access to God’s wisdom, but he knows nothing about shark fishing... How’s the bait holding up?”

An association football player and hockey player walk into a bar and sit next to each other.

The two only order one beer each, and at one point an argument occurred. The two, deciding not to disturb the rest of the visitors, took it outside and prepared for a fight.

Before any punches could be thrown, the football player fell to the ground and called for medical help.

2 hockey players were fighting on the rink.

Both were swinging at each other full strength. Until one lands a nice right-handed to the jaw and the hockey player lands face first onto the ice.

A player on the bench says, “At least he got ice on it right away.”

One fine day, brave Captain Smith and his crew of sailors were sailing the ocean blue.

Suddenly, on the horizon, there loomed a ship with a skull and crossbones raised on the mast.

The crew was frantic, seeking refuge and asking the captain what to do.

Brave Captain Smith looked at the approaching ship for a moment and said, “Bring me my red shirt.”

The call was taken up at once by a cabin boy. As soon as Captain Smith had the shirt in his possession, he ordered the man at the wheel to head straight for the pirate ship. In the ensuing fight, the pirate ship was all but destroyed.

The sailors were recounting their individual triumphs afterward when someone asked Captain Smith why he had asked for his red shirt before the battle.

He responded, “If I was wounded, I did not want your confidence to wane. This way, you would keep fighting no matter what happened to me.”

The crew had a newfound admiration for its captain, and they talked all night about his bravery.

About a week later, there loomed on the horizon 10 pirate ships. Once again, the crew looked to its captain for leadership. Calmly, Captain Smith said, “Boys, bring me my brown pants!”

A husband and wife had a fight.

Wife called her mom, “He fought with me again, I am coming to stay with you.”

Mom: “No, dear, he must pay for his mistake. I am coming to stay with you!”

What does Spider-Man do when he’s not fighting crime?

The morel of the story... killed him.

What’s black and white and green in the middle?

Two zebras, fighting over a pickle.

Many years ago Chuck Norris and a brown bear had a fight.

The loser had to go live in the North Pole.