Enjoy our team's carefully selected Donut Jokes. Laugh yourself and share the funniest jokes with your friends! 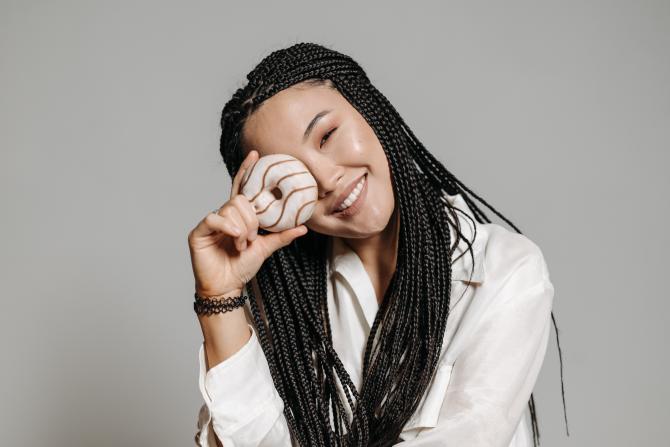 WARNING IF YOU HAVE SEEN A LINK ON THE INTERNET OFFERING FREE DONUTS, DO NOT CLICK ON IT!

IT IS A VIRUS THAT FORCES CAPS LOCK TO BE PERMANENTLY ACTIVATED ON YOUR COMPUTER.

What did the cops see after they told the Pillsbury Doughboy to spread ’em?

How do beat cops define the word “doughnut”?

A local bakery owner who is absolutely crazy about money.

Why did the cops arrest the donut baker?

He was caught pinching the salt.

Why do cops that play basketball like donuts the most?

Because they love to dunk them.

Why are cop donut shop jokes always so funny?

They never get mold.

Officer: “Do you know why I stopped you?”

Blonde: “Because I didn’t pull out of the donut shop too fast?”

What is every policeman’s favorite charity fundraiser?

What do cops call it when they’re called out to the local donut bakery?

Which holiday is every policeman’s favorite?

I really want to start a donut shop.

But I don’t have enough dough.

How do you remove the inherent bureaucracy that’s plaguing the donut industry?

Cut out the middle, man.

What did the donut say to the loaf of bread?

If I had as much dough as you, I wouldn’t be hanging around this hole.

Does anybody go to the donut party?

I heard it was jam packed.

What did the taco say to the depressed donut?

Donut: “I donut know what to say.”

What does Bob Marley say to his friends when they come around for donuts and coffee?

The donut shop got robbed.

The burglars said they chose it because the shop was rolling in the dough.

What is the best way to have a well-rounded diet?

What did the sign on the baker’s door read when she wanted to be alone?

Vacationers spend too much time and money at donut shops.

What sign was hanging outside the room where all the donut lovers were having a meeting?

Why did the daughter start eating donuts?

Because her mother said, “You better eat hole foods.”

Which nut has the most calories for the human body?

What would you call a priest pastry?

What would donuts’ favorite drink be?

How can you justify donuts being healthy?

Because they are included in the hole food category.

Why do the people say donuts are made by God?

Because they are hole-y.

Why do many donuts feel sad?

Because they feel really empty inside.

What did you tell the shopkeeper at the grocery store?

Donut mind me, I am here for the hole food.

Why are donuts good at playing golf?

They always have a hole in one!

What did the basketball player who loved donuts say after the match?

Let’s go to Dunkin’ Donuts for the hole food protein!

What does the gym instructor say after having loads of desserts?

Why do you think a donut would ever become a priest?

Because it is very hole-y.

Why do people ignore filled donuts?

Because they are just full of themselves.

What did the doughy wife say to the donut husband?

How was the donuts’ hole business?

Not at all jam-packed.

Why do donuts make terrible teachers?

What type of window do donuts prefer in their homes?

What is the only thing that can cure a sick do-nut?

What did an angry donut say to his wife?

Donut talk to me!

A cream-filled donut and an eclair decided to get a divorce.

It’s a sad story, but the real victims are their children. They’re in for a grueling custardy battle.

The arrogant baker declared, “You’ll never hear a complaint about my doughnuts outside this shop window.”

The customer agreed, “It must be the double glazing.”

Why do golfers love donuts?

What did the pastry chef say to his unsupportive father?

“Donut hole me back!”

Why did the donut start going to therapy?

It couldn’t get over the feeling that something was missing — it never felt hole!

What do you call a pastry that is a priest?

Why did Tiger Woods return the donuts?

Because there was a hole in one.

What do you call a cute donut? Adoughrable.

Where was the first donut cooked?

Why did the baker stop making donuts?

He got tired of the HOLE business.

Why did the Croissants take the Donuts and Bagels to Disneyland?

They thought it would be fun for the hole family.

What do you call an underwater Dunken’ Donuts?

Why do crypto fans love donuts?

...are the Beigne of my existence.

I heard Dunkin’ Donuts has a cold brew now.

What did the donuts do on their date?

They glazed into each other’s eyes.

How does the Krispy Creme sales rep refer to his agenda?

Which kind of donuts can fly?

Where do basketball players get their coffee?

What’s the healthiest part of a donut?

What’s under the Pillsbury Doughboy’s apron?

I went to Dunkin’ Donuts and ordered 4 blueberry donuts and the cashier asked if I wanna box...

I’ve been banned for life from that shop.

What do you see when the Pillsbury Doughboy bends over?

I’ve heard Dunkin’ Donuts is going to be the official sponsor of no nut November.

Their name will be Dunkin’ Nonuts for a month.

A priest walked into a barber shop in Washington, D.C.

After he got his haircut, he asked how much it would be.

The barber said, “No charge. I consider it a service to the Lord.”

The next morning, the barber came to work and there were 12 prayer books and a thank you note from the priest in front of the door.

Later that day, a police officer came in and got his hair cut. He then asked how much it was.

The barber said, “No charge. I consider it a service to the community.”

The next morning, he came to work and there were a dozen donuts and a thank you note from the police officer.

Then, a Senator came in and got a haircut. When he was done he asked how much it was.

The barber said, “No charge. I consider it a service to the country.”

The next morning, the barber came to work and there were 12 Senators in front of the door.

What do you call a kilogram of donuts?

Do cops like doughnuts better when they’re spelled Do-Nuts?

What do prisoners in Denver County lockup eat for breakfast?

If Johnny buys seventeen donuts every Monday and eats twelve of them each Wednesday, what is Johnny left with at the end of the year?

Donut judge me for being a dessert lover!

Do or donut, there is no try.

You donut know how much I love you!

I allow myself only one donut per year.

You need to understand the difference between want and need.

The optimist sees the donut whole.

The pessimist sees the donut hole.

Some of them have fillings.

A person at the store asked me if doughnuts are healthy.

I don’t know, but I never met a sick one in my entire life.

I choked on a carrot this afternoon and all I could think was, “I bet a donut wouldn’t have done this to me.”

I just heard that the Dunkin’ Donuts in my area will initiate with a surcharge for coming in without wearing a mask.

They’re going to call it a cough fee.

The other day I saw an event a local church was having at a dispensary where they were giving away donuts and spreading the Word of God.

They called it Glaze It, Blaze It, and Praise It.

I found a store that only sells bagels and donuts.

Yo’ Mama so stupid, she returned a donut because it had a hole in it.

“Just in time to eat all the birthday donuts.”

Because there is a hole in one.

What did the blonde say when she looked into the box of Cheerios?

A donut walks into a church, approaches the priest and explains, “Excuse me, Father, I don’t mean to trouble you, but I’m very interested in joining the clergy. I was hoping that you could give me some pointers.”

The priest, after taking a moment to accept the fact that he’s speaking with a pastry, offers a warm smile in response.

“That is truly a noble calling,” he says. “Most frequently, individuals who wish to become priests begin by growing active in their parish, then entering a seminary. While in attendance there, would-be clergy members work to excel in every regard, reaffirming their beliefs and devoting themselves to the path of righteousness. When the time comes, a given initiate will be ordained as a deacon, which will allow them passage to the priesthood.”

“That sounds like a very involved process,” the donut confesses. “I’m not sure I have the time.”

“If you don’t mind me asking...” replies the priest. “What made you think you wanted to join the clergy if you’re not willing to commit to the process? Why do you want to be a priest at all?”

What did the sad man say to the man at the dessert counter?

What kind of nut doesn’t have a shell?

What would you call a cute and sassy donut?

Why did the boy stop eating donuts?

Because he got bored with the hole thing.

What do you get when you cross Frosty with a baker?

Which nut has a hole in it?

“Doughnut forget to do your homework or you will have to go to summer school!”

“Doughnut forget to close the door!”

What are strange donuts made out of?

Why couldn’t the teddy bear finish his donut?

How did the strawberry donut feel after dinner?

What’s a donut’s favorite day of the week?

Why did the donut go to the dentist?

To get a filling.

My dad and I were having donuts for lunch.

He said, “Enjoy the HOLE donut!”

Is it proper to eat donuts with your fingers?

No, fingers should be eaten separately!

What’s the best thing to put in a donut?