Enjoy our team's carefully selected Corn Jokes. Laugh yourself and share the funniest jokes with your friends! 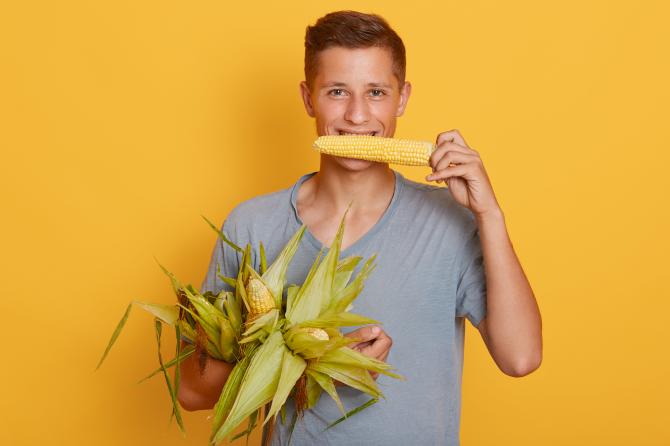 A farm boy accidentally overturned his wagon load of corn.

The farmer who lived nearby heard the noise and yelled over to the boy, “Hey Willis, forget your troubles. Come in and visit with us. I’ll help you get the wagon up later.”

“That’s mighty nice of you,” Willis answered, “but I don’t think Pa would like me to.”

“Well okay,” the boy finally agreed, and added, “but Pa won’t like it.”

After a hearty dinner, Willis thanked his host.

Willis: “I feel a lot better now, but I know Pa is going to be real upset.”

“Don’t be foolish!” the neighbor said with a smile. “By the way, where is he?”

Willis: “Under the wagon.”

What do you call a single kernel of corn?

Police have arrested a gang of Corn Flakes that they allege committed a spree of armed robberies throughout the metro area.

A Police spokesman described them as cereal offenders.

Two corns in a field were telling each other corny jokes.

They were the laughing stalk of the field.

A blonde calls her boyfriend and says, “Please come over here and help me. I have a killer jigsaw puzzle, and I can’t figure out how to get started.”

Her boyfriend asks, “What is it supposed to be when it’s finished?”

The blonde says, “According to the picture on the box, it’s a rooster.”

Her boyfriend decides to go over and help with the puzzle.

She lets him in and shows him where she has the puzzle spread all over the table.

He studies the pieces for a moment, then looks at the box, then turns to her and says, “First of all, no matter what we do, we’re not going to be able to assemble these pieces into anything resembling a rooster.”

He takes her hand and says, “Second, I want you to relax. Let’s have a nice cup of tea, and then,” he said with a deep sigh, “let’s put all the Corn Flakes back in the box.’

Do zombies eat popcorn with their fingers?

No, they eat the fingers separately.

Yo Mama's appetite is so huge, she uses a truck to carry her popcorn to the movies.