Jokes About the Cold

Enjoy our team's carefully selected Cold Jokes. Laugh yourself and share the funniest jokes with your friends! 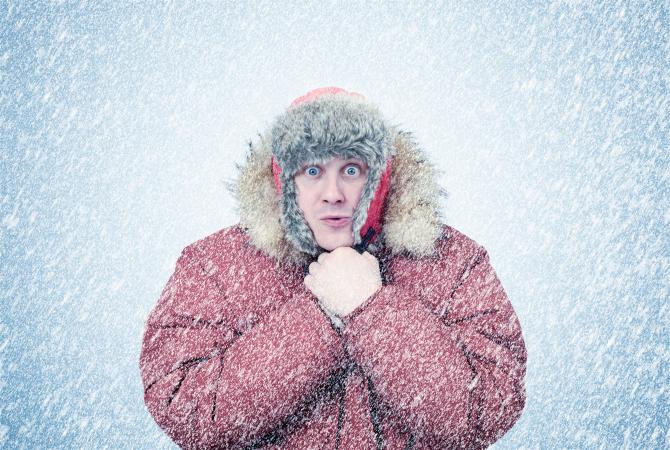 It’s as cold as a brass toilet in an outhouse in Alaska.

As cold as a witch’s tit in a brass bra.

What do you do when you get locked outside your house in the cold weather?

You talk to the lock because communication is key.

It was so cold that roosters were rushing into Kentucky Fried Chicken and begging to use the pressure cooker!

It was so cold that the squirrels in the park were throwing themselves at an electric fence!

It was so cold that the optician was giving away free ice scrapers with every new pair of eyeglasses.

My husband and I purchased an old home in Northern New York State from two elderly sisters.

Winter was fast approaching and I was concerned about the house’s lack of insulation.

“If they could live here all those years, so can we!” my husband confidently declared.

One November night the temperature plunged to below zero, and we woke up to find interior walls covered with frost.

My husband called the sisters to ask how they had kept the house warm.

After a rather brief conversation, he hung up.

“For the past 30 years,” he muttered, “they’ve gone to Florida for the winter.”

It’s so cold, I farted snowflakes.

It’s so cold, I chipped my tooth on my soup.

It’s so cold, you have to open the fridge to heat the house.

It’s so cold, the rock rattling around in your shoe is your toe.

Girlfriend: “Excuse me, could you please close that window? It’s terribly cold outside.”

Boyfriend: “And you seriously think it’s going to get any warmer outside when I close it?!”

What does Spider-man wear when it gets cold out?

Why did the cow jump over the Harvest Moon?

Because the farmer had cold hands!

Two Canadians die and end up in Hell.

Satan decides to pay them a visit, so he walks into their room and sees them talking and laughing.

Confused, he asks them why they’re happy.

They tell him, “Well, we’re so sick of the cold where we’re from, and this place is nice and toasty.”

Satan, annoyed, storms away and goes to Hell’s boiler room, where he turns up the temperature.

He goes back to the Canadians’ room, along the way being begged by all sorts of people to put the heating back down.

He enters the room to see the Canadians having a barbecue.

Furiously, he asks them what they’re doing.

“Well, we can’t pass up this wonderful weather without getting out the barbecue!”

Satan realizes he’s been doing the wrong thing. He goes to the boiler room and turns it down until it’s at a colder temperature than ever seen on earth.

He knows he’s won now, so he goes back to the Canadians’ room, only to see them jumping up and down in excitement.

They look at him and shout at the same time, “Hell froze over! That means the Leafs won!”

My commute to work today was just awful!

Floor between bedroom and office was really cold.

If you ever get cold, just stand in the corner of a room for a while.

A couple goes to the cinema.