Enjoy our team's carefully selected Chocolate Jokes. Laugh yourself and share the funniest jokes with your friends! 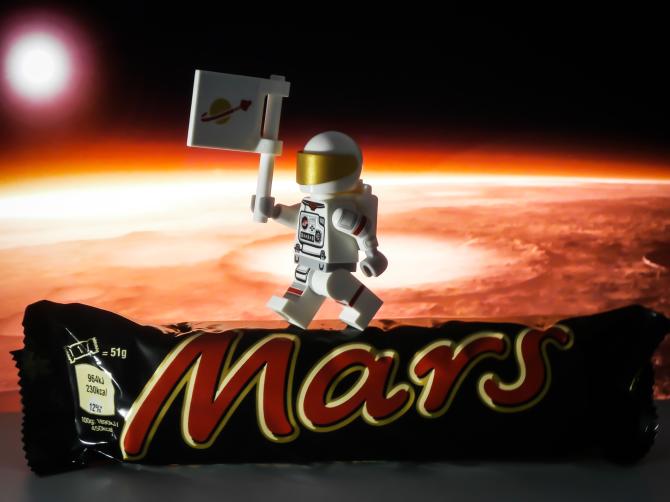 There was a sign next to it saying “whatever you wish for comes true once you slide down”.

One kid stepped up and slid down, he wished for a river of chocolate, thus he swam in a chocolate river.

The second kid slid down and wished for a mountain of money, he then landed in a pile of money.

The third kid went down and said, “Weeeeeeee!”

If you were a food what would you be?

Friend 1: “Pizza because I’m so cheesy.”

Friend 2: “Chocolate chip cookie because I have lots of friends.”

Me: “Donut because I’m so empty inside.”

A man walks into a petrol station and says, “Can I please have a KitKat Chunky?”

The lady behind the till gets him a KitKat Chunky and brings it back to him.

Two wafers fell into a vat of chocolate.

The first one pulled the second one out.

The second one said, “Thanks, you’re a lifesaver!”

The first one responded, “Actually, I’m a KitKat.”

How do you know that workers in factory that produces M&M’s are protesting?

How do you know that workers in factory that produces M&M’s are protesting really hard?

They paint the m letters on the wrong side of the chocolate candy.

When I was a kid you could walk into a shop with a quarter and come out with 2 cokes, 3 bags of chips, 2 chocolate bars and an ice cream.

Why did the blonde buy a brown cow?

To get chocolate milk.

Why did M&M go to University?

Because he wanted to be a Smartie.

What did the shop owner say when he accidentally ordered too much chocolate and marshmallows?

We’ve got a rocky road ahead of us...

What is round, ugly, smeared with chocolate and just showed up unwashed to your first date?

Did you hear about the magician that had chocolate in his shirt?

He had some Twix up his sleeve.

What giant dog is made of strawberry, vanilla and chocolate ice cream?

Why is the Toblerone chocolate shaped like a triangle?

So that it’ll fit inside the box.

What’s brown and very bad for your dental health?

A doctor and an engineer went into a chocolate store.

As they were busy looking around, doctor stole 3 chocolate bars.

As they left the store, the doctor said to the engineer, “Man! I’m the best thief ever, I stole 3 chocolates and no one saw me. You can’t beat that!”

The engineer replied, “You wanna see something better? Let’s go back to the shop and I’ll show you real stealing.”

So they went to the counter and the engineer said to the shop boy, “Do you wanna see magic?”

The engineer said, “Give me one chocolate bar.”

The shop boy gave him one, and he ate it.

Then he asked for a second, and he ate that as well.

Finally, he asked for the third and finished that one too.

The shop boy asked, “But where’s the magic?”

The engineer replied, “Check in my friend’s pocket, and you’ll find them!”

My cousin works in a chocolate shop.

He works behind the bar.

A Korean martial artist was giving away chocolate bars.

What kind of bar is kid-friendly?

What is an astronaut’s favorite chocolate?

What do you get when you dip a kitten in chocolate?

What kind of candy bar does an employee crave before the weekend?

Sad news from the Nestle factory today as a man was crushed to death by hundreds of boxes of chocolate.

He tried in vain to attract attention but every time he yelled “The Milky Bars are on me!”, people just cheered.

I heard a joke about chocolate bars and it wasn’t that funny.

So I just snickered...

What are the sun’s favorite chocolate bars?

My son is three years old and I took him shopping.

When we got home, he had a chocolate bar in his pocket.

Now, I didn’t buy it and he certainly didn’t buy it, so I marched him straight back to the shopping center and went to the jewelers.

I just found bacteria growing on my chocolate bar.

I guess there is life on Mars after all.

My therapist told me the way to achieve true inner peace is to finish what I start.

So far today, I have finished two bags of chips and a chocolate cake.

Life is like a box of chocolates, mostly disappointing.

These days, shoes are called snickers.

People often ask me how I manage to smuggle chocolate into movie theaters.

I just got over my addiction to chocolate, nuts and marshmallows.

I have to admit it was a rocky road.

My wife hates it when I swap her chocolate bar wrappers round.

It gets her Snickers in a Twix.

If you pull it out in school, then everybody is suddenly your friend.

Last night in jail, they gave us mint chocolates for dessert.

I thought they’d be gross, but they were actually pretty good. Turns out...

That in-prison mint isn’t as bad as I expected!

“If you get a new baby bunny for Easter, it is not laying little brown chocolate eggs”

It’s more like a jar of jalapenos: what you do today can burn your ass tomorrow.

Yo mama so fat, her blood type is Nutella.

I think he has a Neapolitan complex.

Hershey bars have dominated chocolate for over a century.

Is anyone else not offended we still don’t have a Himhe bar?

which is the most feminine candy?

In case you were wondering, chocolate identifies as female.

I told my girlfriend that if she wanted her Hersheys bar she had to bark like a dog.

After she did it, I proceeded to eat it explaining that chocolate wasn’t good for dogs.

Why did the donut visit the dentist?

He needed a chocolate filling.

Snickers – he only snickers!

Why did the candy bar cross the road?

Because he was choco-LATE for the bus!

Which candy bar is handsome, talented, rich, and lacks for nothing?

What do you call the rocks kids covered in chocolate?

How did the chocolate frog sneak into Hogwarts?

It used the invisibility croak.

I’m looking forward to the day we celebrate that chocolate cookie with white icing in the middle.

I once saw a ghost made of chocolate and vanilla.

There is a man, he is dying in his bed in his home. He smells something amazing. It’s the smell of his favorite chocolate chip cookies.

With his last strength, he gets out of bed and goes to the kitchen, where his wife of 50 years, is cooking these beautiful chocolate chip cookies. They are on a plate, four of them, just out of the oven.

With his last human strength, he reaches over to take one of the cookies.

His wife sees him, rushes over, she slaps his hand, and she says, “No, they are for the funeral.”

An English couple decided to adopt a little German boy.

After two years, the child doesn’t speak and his parents start to worry about him.

After three years, he still has not spoken and after four years, he has yet to utter a word.

The English couple figure he is never going to speak but he is still a lovely child, and on his next birthday, they throw him a party and make him a chocolate cake with orange icing.

The parents are in the kitchen when the boy comes in and says, “Mother, Father, I do not care for the orange icing on the chocolate cake.”

To which the German boy replies, “Of course.”

“How come you’ve never spoken before?” asks his father.

“Well,” says the boy, “up until now, everything has been satisfactory.”

The housewife answered a knock on the door and found a total stranger standing on the doorstep.

“Excuse me for disturbing you, ma’am,” he said politely, “but I pass your house every morning on my way to work, and I’ve noticed that every day you appear to be hitting your son on the head with a loaf of bread.”

“Every day you hit him on the head with a loaf of bread, and yet this morning you were beating him with a chocolate cake.”

“Well, today is his birthday.”