Enjoy our team's carefully selected Bike Jokes. Laugh yourself and share the funniest jokes with your friends! 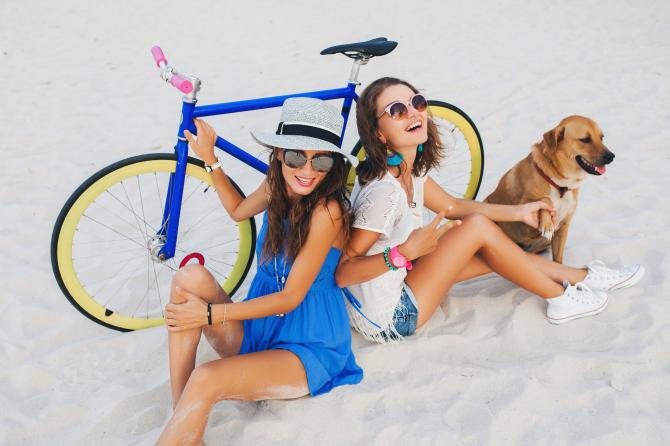 A guy sees his mother-in-law riding a bicycle.

“Where are you going?” he asks.

“To the cemetery,” she replies.

Guy: “And who is going to return the bike?”

A woman hurried to a pharmacy to pick up the medication.

When she got back to the car, she found her keys locked inside.

The woman found an old rusty coat hanger on the ground.

She looked at it and said, “I don’t know how to use this.”

She bowed her head and asked God to send her some help.

Within five minutes an old motorcycle pulled up, driven by a bearded man who was wearing an old biker skull rag. He got off his cycle and asked if he could help.

She said, “Yes, my husband is sick. I forgot my keys in the car. Can you use this hanger to unlock my car?”

He walked over to the car, and in less than a minute the car was open.

She hugged the man and through tears said, “Thank you, God, for sending me such a very nice man.”

The man heard her little prayer and replied, “Lady, I am not a nice man. I just got out of prison yesterday; I was in prison for car theft.”

The woman hugged the man again, sobbing, “Oh, thank you, God! You even sent me a professional!”

Two young boys walked into a pharmacy, picked out a box of

feminine product, and proceeded to the checkout counter.

The man at the counter asked the older boy, “Son, how old are you?”

The man continued, “Do you know what these are used for?”

The boy replied, “Not exactly, but they aren’t for me. They’re for him. He’s my brother. He’s four. We saw on TV that if you use these, you will be able to swim and ride a bike. Right now, he can’t do either.”

I got a wooden bike with wooden handles and wheels. Guess what?

I was in a bar some days ago when a beautiful girl asked me, “What do you do?”

I replied, “I race motorcycles.”

She asked further, “Do you usually win many races?”

I said, “No, the bikes are much faster than I am.”‬