Enjoy our team's carefully selected Big Nose Jokes. Laugh yourself and share the funniest jokes with your friends! 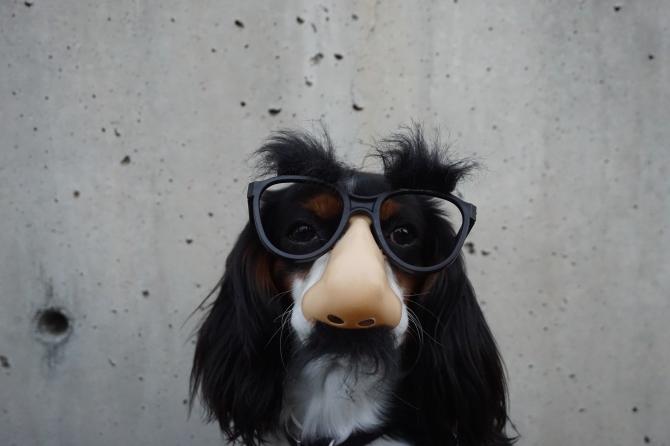 An anteater walks into a bar.

“Having a nice day?” asks the barman.

“Why the long nos?” asks the barman.

Your nose is so big that when you sneeze... Everyone runs for cover!

Why are elephant’s noses so big?

So they can scratch their bums!

A man with a wooden eye is at a dance.

During a slow dance, he can’t find a partner to dance with him.

He sees from the opposite side of the dance floor a girl with a large nose.

Seeing that she is also without a dance partner, he makes his move.

He approaches her and is frank with her, asking, “Would you dance with me?”

Filled with excitement, she yells, “Would I!”

What’s the worst thing about having a big nose?

Birds are always perching on it!

Your nose is so big that when you lie on your back in the pool, people think it’s a shark!

What’s worse than having a big nose?

Having a big nose and tiny hands!

Why do gorillas have big nostrils?

Because they have big fingers!

My sister said I’m being immature.

I guess she isn’t getting her nose back.

If my nose runs, should I catch it?

There’s a reason our nose is in the middle of our face.

It’s because that’s the scenter.

The thing people overlook most of the time is their noses.

The nose was very tired because it kept running.

One day at football practice, the nose was sad.

It was probably because he didn’t get picked.

People always pick their noses, but I never did.

I have always liked the one nose that I was born with.

I don’t like people who do not cover their mouths and noses when they sneeze.

These people make me sick.

At first, I really hated the large pimple on my nose.

But it’s grown on me.

You are the only person that can smoke a cigarette in the rain with your hands tied on your back. Your nose is like a natural canopy.

You must love staying outdoors. I hear plants make oxygen just for you.

You got the whole world in your nose. How lucky are you.

When you laugh the whole world will laugh with you. But if you sneeze, the world will say goodbye to you.

My friend was ill and had a runny nose she couldn’t fix.

I suggested, “Break its legs.”

My dad once told me that it is not the size of the nose that matters but what is inside it.

The only clan thing you find in a well cleaned big nose is fingerprints.

If cows laughed, milk would come out of their noses.

I guess that’s why they moo.

Yo Mama Jokes About the Nose

Yo mama so stupid, she tried to smell her own nose.

Yo momma’s nose so big, you can go bowling with her boogers!

Yo moma so lazy, she sticks her nose out the door and let the air blow it.

Yo mama’s so stupid she combs the hair in her nose and not on her head.

Yo mama’s nose is so big, she can smell a fart coming.

Yo mama’s nose hairs are so long that they make Bobobo jealous!

Yo mama’s breath is so bad that when she talks her nose hairs fall out.

Yo mama so fat, when she sat on a dollar bill she squeezed a booger out of George Washington’s nose.

What do you call a man with no body and no nose?

Friend 1: “My dog rolled around in the mud all day. How does he smell?”

I was sick and told my mom I had a runny nose.

She told me, “You should tell it to walk instead.”

A man went to the doctor and said, “I think I am upside down.”

When the doctor asked why he felt like that, the man said, “Because my feet smell and my nose runs.”

I lost my watch at a party once.

An hour later I saw some guy stepping on it while he was harassing some woman at that party.

Infuriated, I immediately went over, punched him and broke his nose.

“No one does that to a woman, not on my watch!”

Pulled out a couple of nose hairs to see if it hurts.

Judging by the reaction of the man asleep next to me on the train, it seems very painful.

Why can’t your nose be 14 inches long?

Because then it would be a foot!

What’s the best thing about being an anteater?

You’re born with a built-in straw!

Why do anteaters never get colds?

Because their noses are full of anty-bodies!

A man enters a pet shop and wants to buy a polar bear.

The shop assistant takes the man to the bear’s cage and says, “The polar bear is absolutely tamed, but whatever you do, don’t touch his nose.”

The man goes home with his new pet and everything is OK.

Until the man can’t no longer withstand, “I have to try what happens when I touch his nose!”

So he touches the nose and the polar bear leaps towards him and chases the man throughout the house.

Finally, the man runs out of breath and the polar bear catches him.

With his paw, the bear taps the man’s shoulder and says, “You are it!”

A family was driving in their car through an Arizona desert.

When they ran into a family of skunks.

They stop the car and get out so that they could check on the family of skunks to make sure they were alright.

They found all of the skunks to be ok except for one little baby skunk.

The wife then asked the husband if they could take the baby skunk to the vet to get it the medical attention that it needed.

They come up at the California border checkpoint and the wife starts freaking out, “There’s no way they let us take this skunk across the border, what are we gonna do?”

The husband thinks for a second and says, “Hey I got it! Take the baby skunk and put it under your dress.”

The wife replies, “Well what about the smell?”

The husband says, “It’ll be alright, just hold its nose.”

Me and my buddy were going to go pro, but we couldn’t play because we had sinus problems... No one would sign us up.

Yesterday I went to the doctor with a sinus infection.

But he told me it was all in my head.

I used to have a problem with my sinuses.

Until I bought a calculator.

“Man, my sinuses are on fire!”

It’s impolite to ask people questions about their sinuses because that’s their personal business.

My wife has a sinus condition that suppresses her ability to detect odors.

But she gets offended when I tell people that she doesn’t smell good.

I once saw a hippo that had a sinus infection.

I named it “The heaposnotamus”.

Jokes About Sense of Smell

What smells the best at a Thanksgiving dinner?

The insects that smell the best are deodor-ants.

My brother wanted a dinosaur as a gift for his birthday.

Then I told him, “They’re all extinct.”

Hearing that, he said, “No, I don’t want a stinky dinosaur.”

My 2 year old sister’s stinky feet were smelling like cheese.

My dad was wondering what happened, so I told him that she had chee-toes.

Light can be measured, and so can sound.

Smell can also be measured, by scentimeters.

My mom’s sister is good at cleaning stuff, especially any stinky laundry.

We call her a deodor-aunt.

There was a company that sent people to everyone’s homes and claimed that they could track you from your smell.

But they couldn’t do that without your con-scent.

There was a bad smell coming from a dumpster.

So, my mother made my sister burn some spices to cover it.

The punctuation that smells the best is semi-cologne.

I decided to make a witty perfume.

My colleague said the most important component should be the scents of humor.

This Halloween, Gucci sold out all of their $500 scented candles.

Some people seem to have so many dollars but not enough scents.

I accidentally sprayed some deodorant in my mouth today.

Now whenever I’m talking, this weird axe-scent is coming out.

Yesterday I complimented my dad that he smells good.

He just replied, “That’s because I use both my nostrils.”

I bought a gold-scented candle and burned it.

It had a very rich aroma.

I went to travel to the meadow where I always used to play when I was a child.

There were familiar scents all over.

One eye told the other, “Between you and me, something smells.”

My poor dog doesn’t have a big nose.

That makes him smell terrible.

What’s the best thing about having a big nose?

You’re the first to know when dinner’s ready!

There are three moles at the bottom of their mole hole.

The first mole—daddy mole—wakes up, climbs to the top, sticks his nose out, and says, “Mmmmm... I smell bacon!”

Mommy mole wakes up. She climbs to the top, sticks her nose out, and says, “Mmmmm... I smell pancakes!”

Baby mole wakes up. He climbs up but gets stuck behind his mom and dad.

He takes a big whiff and says, “All I can smell is molasses!”

Why is it that your nose runs, but your feet smell?

The best way to keep a skunk from smelling is to hold its nose.

Why was the man with the big nose sad?

He could really smell his feet!