Enjoy our team's carefully selected Bat Jokes. Laugh yourself and share the funniest jokes with your friends! 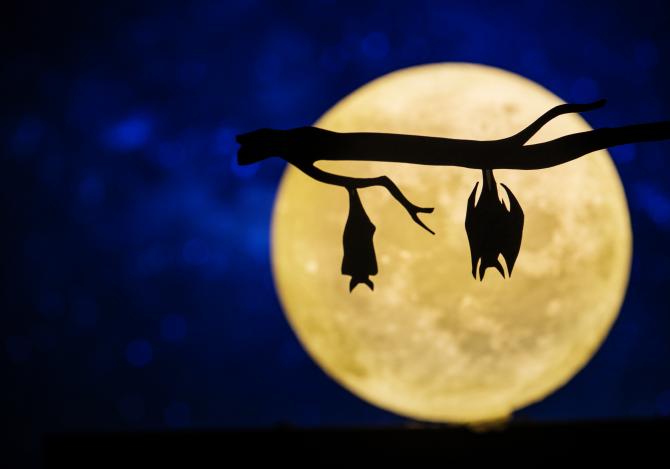 Baby rat and mommy rat were walking down a dirt road when a bat flies by.

Baby rat turns to his mom and says, “Look, ma, an angel.”

If bats could talk, what would they say about the coronavirus?

Now you know how it feels to have your world turned upside down!

A group of bats, hanging at the ceiling of a cave, discovers a single bat standing upright underneath on the floor of the cave.

Surprised by this unusual behavior, they ask this fellow, “What the heck are you doing down there?”

And the fellow shouts back, “Yoga!”

Dracula wanted to know which of his bats was the best. So he organized a little competition. The bat which would drink more blood in less time than others would be the winner.

The first bat went and came back after 10 minutes. Its mouth was full of blood. Dracula was impressed.

The bat said, “Do you see that tower? Behind it there is a house. I went inside and drank the blood of all the family.”

The second bat went and came back after 5 minutes. He too had blood on all his face.

Dracula was shocked, “How did you do that?”

The bat said, “Do you see that tower? Behind it there is a hotel. I went inside and drank the blood of all the guests.”

Now the third bat went and came back just after 1 minute. There was blood on all his body.

Dracula couldn’t believe his eyes, “How did you do that?”

The bat said, “Do you see that tower?”

Why America failed to save the world from Coronavirus?

Thor is in Asgard.

Hulk doesn’t have much power.

The rest of the Avengers are suffering from Corona.

And China ate Spider-Man and Batman.

What does for call the moon after a bat flies into it?

I am half Spider-Man, half batman and half moon knight...

Why is Superman stupid?

Because he wears his underwear over his pants.

Why is Batman more stupid?

Why is Robin even more stupid?

Because he followed what batman did.

Why is Wonder Woman stupid?

Because she wears a belt on her head.

Why is Spider-Man the most stupid superhero of them all?

Because he wears his underwear over his head.

Your Parents when you move out.

Why did Batman break up with Catwoman?

I emailed Netflix and asked if they had Batman Forever.

They said, “No, just until the end of June.”

My girlfriend said I’m starting to annoy her because I relate everything to Batman.