Enjoy our team's carefully selected Ball Jokes. Laugh yourself and share the funniest jokes with your friends! 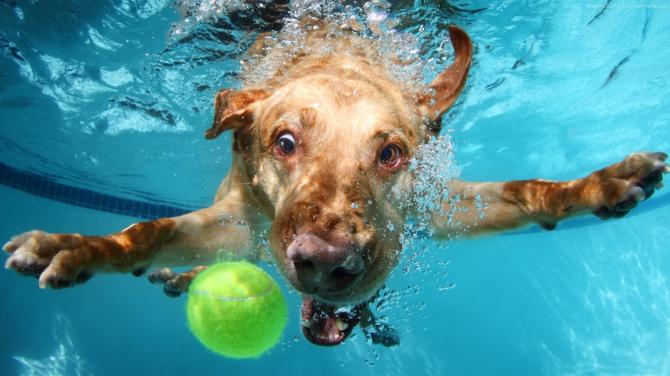 He stares at the ball and the ball goes into the hole to hide.

All the adults judged me because I jumped into the ball pit at the children’s activity center.

It’s like they’d never seen a naked man before.

I was wondering why the ball was getting bigger...

Then it hit me.

The computer programmer to his son: “Here, I brought you a new basketball.”

Son: “Thank you, daddy, but where is the user’s guide?”

Why does a pitcher raise one leg when he throws the ball?

If he raises them both, he’d fall down.

A man complains to his wife about not having anyone to play golf with.

His wife said, “Well what about your friend Clyde?”

The man replied, “Would you want to play with someone who cheats on his score and moves the ball when you aren’t looking?”

The man said, “Neither would Clyde.”

I watched a baseball game once, where the umpire kept wandering about, and was eventually knocked out by a ball.

It was the fall of the roamin’ umpire.

I went bowling once. I threw the ball down the lane and got a strike.

The result was that I am now banned from the swimming pool.

Why do football players struggle at bowling?

Because they had a hard time kicking the ball!

I recently heard that Turkeys aren’t allowed to play baseball.

No matter how many times they hit, they’ll always hit Fowl balls.

Why was Cinderella thrown off the basketball team?

She always ran away from the ball.

Have you ever seen how they throw the ball into the crowd after winning the game?

I found out that this is frowned upon in bowling.

What is the 7th pin in bowling called?

Where do dead bowling pins go?

To the pit of doom!

What do you call a triumphant procession held by the bowling pins?

Where do old bowling balls end up?

What did the bowling ball say to the other ball?

What did the bowling ball say to the balling pins on being overused?

Go on a strike.

Why did the man reach the bowling alley before his friends?

To get the ball rolling.

Why is bowling a better sport than golf?

Last year, I had a job at the bowling alley.

It wasn’t for long though; I was only tenpin.

I wanted to go bowling, but the pins were on strike.

Why are football players not allowed in bowling alleys?

After getting a strike, they spike the ball.

My friend told me that onions were the only things that could make him cry.

So I threw a bowling ball at him to prove him wrong.

Thought I would be fine having another drink. Woke up later in an alley.

Then, the bowling ball hit me.

The first one to tee off is Moses. He smashes the ball and it is heading right for the water hazard before the green.

Moses raises his club, the water parts, and the ball makes it to the green.

Jesus gets up to swing, cranks it out, and it is headed for the water hazard.

Jesus closes his eyes and prays. The ball skips across the water and lands on the green two feet from the hole.

The old man’s turn comes and he drives the ball.

The ball looks like it is going to drop directly into the water. A fish jumps from the water hazard swallowing the ball, as an eagle drops from the sky, grabbing the fish.

As the eagle flies over the green, a bolt of lightning strikes the eagle, making it drop the fish.

As the fish hits the green, it spits out the ball and the ball falls into the hole, making a hole in one.

Jesus looks at Moses and says, “I really think I’m leaving Dad at home next time!”

Golfer: “Do you think my game is improving?”

Caddy: “Yes sir, you miss the ball much closer now.”

I hit 2 good balls today on the golf course.

I stepped on a rake in the bunker.

How do you make a pool table laugh?

It’s not that the man did not know how to juggle.

He just didn’t have the balls to do it.

What’s the cheapest kind of meat you can buy?

Deer balls. They’re under a buck.

What’s the difference between snowmen and snowwomen?

Why do elves laugh when they run?

Because the grass tickles their balls.

Your mama’s so short, that she can play handball on the curb.

An ergonomic workspace is really important while working from home.

That’s why my couch now has a Pilates ball as a footrest.

What do a man who’s had a vasectomy and a Christmas tree have in common?

A soldier ran up to a nun.

Out of breath, he asked, “Please, may I hide under your skirt? I’ll explain later.”

A moment later two Military Police ran up and asked, “Sister, have you seen a soldier?”

The nun replied, “He went that way.”

After the MPs ran off, the soldier crawled out from under her skirt and said, “I can’t thank you enough, sister. You see, I don’t want to go to Iraq.”

The nun said, “I understand completely.”

The soldier added, “I hope I’m not rude, but you have a great pair of legs!”

The nun replied, “If you had looked a little higher, you would have seen a great pair of balls... I don’t want to go to Iraq either...