Enjoy our team's carefully selected Audit Jokes. Laugh yourself and share the funniest jokes with your friends! 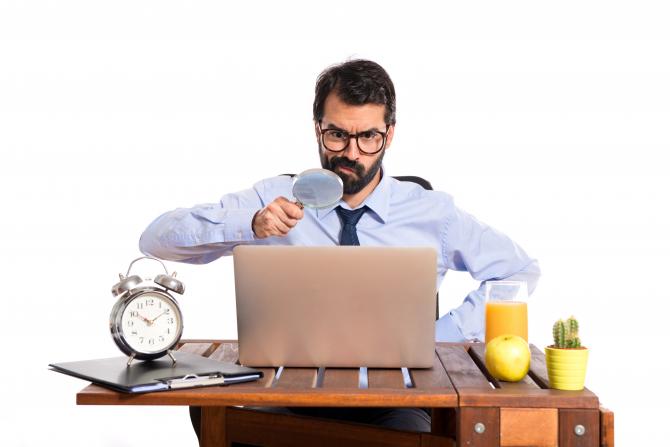 Want to get an idea how important you are during a government shutdown?

A Mormon walks into a bar

and says, “I’m with the Utah Liquor Control Department, prepare for a fifteen-hour compliance audit.”

At the IRS audit.

IRS: “According to your tax return, you claim got money for nothing and checks for free.”

Taxpayer: “Am I in trouble for that?”

A parent gave her kid some sound advice before going to accounting school:

After I spoke with the tax auditor, I slept like a baby.

I woke up every hour and cried.

An IRS auditor is walking down the street when a mugger stops him.

“Give me your money!” the mugger says. “You can’t do that!” says the IRS auditor.

What did the internal auditor do to liven up the office party?

He didn’t show up.

When she was asked why she had such a long password, she said, “The boss said that my password had to be at least eight characters long and have at least one capital.”

Someone who arrives after the battle and bayonets all the wounded.

Sherlock Holmes got audited by the IRS.

He had too many deductions.

The IRS decides to audit Grandpa, and summons him to the IRS office. The auditor was not surprised when Grandpa showed up with his attorney.

The auditor said, “Well, sir, you have an extravagant lifestyle and no full-time employment, which you explain by saying that you win money gambling. I’m not sure the IRS finds that believable.”

“I’m a great gambler, and I can prove it,” says Grandpa. “How about a demonstration?”

The auditor thinks for a moment and said, “Okay. Go ahead.”

Grandpa says, “I’ll bet you a thousand dollars that I can bite my own eye.”

The auditor thinks a moment and says, “It’s a bet.”

Grandpa removes his glass eye and bites it. The auditor’s jaw drops.

Grandpa says, “Now, I’ll bet you two thousand dollars that I can bite my other eye.”

Now the auditor can tell Grandpa isn’t blind, so he takes the bet.

Grandpa removes his dentures and bites his good eye.

The stunned auditor now realizes he has wagered and lost three grand, with Grandpa’s attorney as a witness. He starts to get nervous.

“Want to go double or nothing?” Grandpa asks. “I’ll bet you six thousand dollars that I can stand on one side of your desk, and pee into that wastebasket on the other side, and never get a drop anywhere in between.”

The auditor, twice burned, is cautious now, but he looks carefully and decides there’s no way this old guy could possibly manage that stunt, so he agrees again.

Grandpa stands beside the desk and unzips his pants, but although he strains mightily, he can’t make the stream reach the wastebasket on the other side, so he ends up urinating all over the auditor’s desk.

The auditor leaps with joy, realizing that he has just turned a major loss into a huge win. But Grandpa’s own attorney moans and puts his head in his hands.

“Are you okay?” the auditor asks.

“Not really,” says the attorney. “This morning, when Grandpa told me he’d been summoned for an audit, he bet me twenty-five thousand dollars that he could come in here and pee all over your desk and that you’d be happy about it!”