Enjoy our team's carefully selected Accountant Jokes. Laugh yourself and share the funniest jokes with your friends! 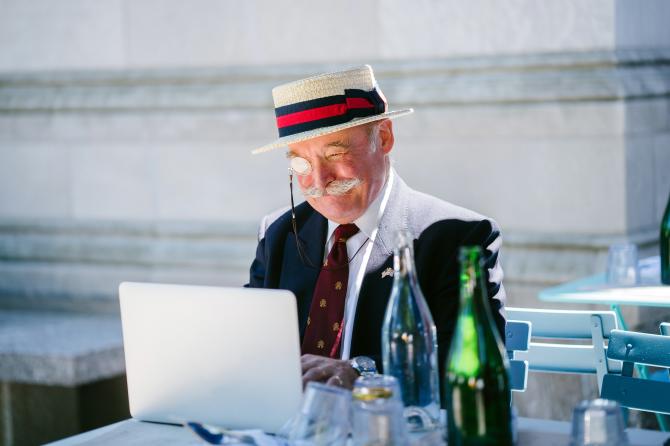 An American goes to the train station so he can start his big trip.

He notices there a machine with the indication: “Put a dollar in the slot and the machine will tell you who you are!”

Curious, he puts the dollar inside the slot and waits.

The man blacked out with the machine’s ability.

So, he decided to trick the machine.

He wore a fake mustache and putted another dollar inside the slot.

“But it’s impossible!” screamed the man, acquiring a maniac need to trick the machine.

He ran to the toilet and disguised as an Arab.

Then, he did the same routine.

Furious then, he disguises as a woman and puts the dollar as usual in the slot.

The partner thinks for a moment and relates the following, “Mr. Jones, one of our clients, came to see me last week and paid me his bill of £1,000 in cash. As he left I counted the notes and they came to £1,100.”

The student said, “I see. The ethics question is ‘Do I tell the client?’”

“Wrong answer! The question is ‘Do I tell my partner?’”

Each and every morning as the more experienced accountant begins the day, he opens his desk drawer, takes out a worn envelope, removes a yellowing sheet of paper, reads it, nods his head, looks around the room with renewed vigor, returns the envelope to the drawer, and then begins his day’s work.

After he retires, the new accountant can hardly wait to read for himself the message contained in the envelope in the drawer, particularly since he feels so inadequate in replacing the far wiser and more highly esteemed accountant.

Surely, he thinks to himself, it must contain the great secret to his success, a wondrous treasure of inspiration and motivation.

His fingers tremble anxiously as he removes the mysterious envelope from the drawer and reads the following message:

“Debits in the column toward the file cabinet.

Credits in the column toward the window.”

What do accountants suffer from that ordinary people don’t?

A businessman tells his friend that his company is looking for a new accountant.

His friend asks, “Didn’t your company hire a new accountant a few weeks ago?”

The businessman replies, “That’s the accountant we’re looking for.”

What do you call a financial controller who always works through lunch, takes two days holiday every two years, is in the office every weekend, and leaves every night after 10 p.m.?

What is the definition of an accountant?

Someone who solves a problem you did not know you had in a way you don’t understand.

An accountant is having a hard time sleeping and goes to see his doctor.

“Doctor, I just can’t get to sleep at night,” he says.

“Have you tried counting sheep?” inquires the doctor.

“That’s the problem. I make a mistake and then spend three hours trying to find it.”

An accountant is walking down the street when he comes across a bum.

“And why should I do that?” asks the accountant.

“Because I’m broke. Haven’t got a penny to my name and nothing to eat,” says the bum.

“I see,” says the accountant. “And how does this compare to the same quarter last year?”

A Doctor was chatting at a party with a Chartered Accountant.

He asked, “How do I manage this delicate issue when people even at a party like this ask me about their joint pains and heartburn and gas trouble? Just because I am a doctor. Not fair!”

The CA friend replied coolly, “Just tell them the right things politely, but send them a bill from your clinic the next morning. Only once. Word will soon get around and it will stop immediately.”

“Wow! Thanks for the tip,” said the doctor.

The next morning the doctor got a bill from his CA friend: “Consulting charges for Business Development”.

I got my first job as an accountant at 22, right out of college.

Suddenly, the week after I turned 30, they fired me.

13 years of loyal service to the company, down the drain.